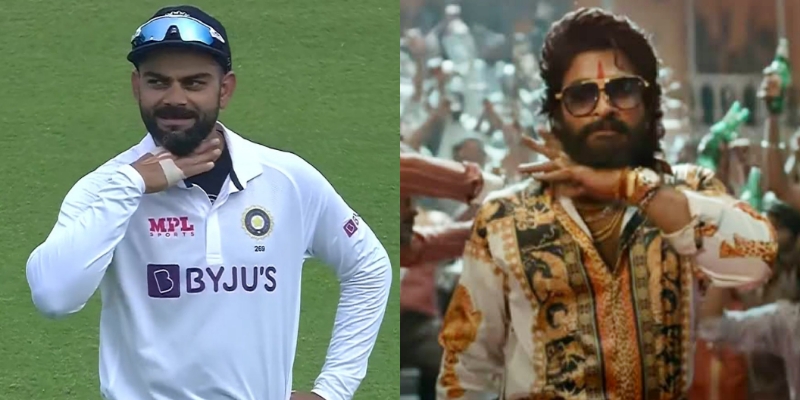 After the release of the South Indian movie ‘Pushpa’, one of the dance moves of the movie has became famous throughout the net. Actor Allu Arjun’s dance style has been seen imitating by many cricketers. This time it’s none other than former Indian skipper Virat Kohli who was seen imitating the move during the India vs Sri Lanka 1st Test match.

The first match of the 2 match Test series between India and Sri Lanka, which was also the 100th Test match of Virat Kohli’s career, ended in India registering a big win by an inning and 222 runs.

Batting first, India put on 574 runs on the board, thanks to a brilliant inning of 175 runs from all-rounder Ravindra Jadeja. In response to which, Sri Lanka couldn’t match India’s combining both their inning.

However, during the third day of the first Test between India and Sri Lanka, Virat Kohli was seen imitating the famous dance move from the South Indian movie ‘Pushpa’. As after the moment the video has gone viral throughout the net, Kohli’s supporters, and everyone else has enjoyed watching this scene unfolding. Many are saying that it is better to see Kohli doing the move than Allu Arjun.

The first Test match between India and Sri Lanka, which was played in Mohali, was the 100th Test for the former Indian captain Virat Kohli. It was always going to be a special match, however Virat may would have wanted a little more from himself as he was dismissed for 45 runs, as the wait for 71st Century continues.

Batting first, it was first a great batting effort from wicketkeeper batsman Rishabh Pant, who was unfortunately dismissed for 96 runs, missing out on his century. However, Ravindra Jadeja played a spectacular knock of 175 runs and was well supported by Ravichandran Ashwin as India had put 574 runs on the board.

In response to that, Sri Lanka were dismissed for 174 runs in the first inning with Jadeja taking a five wicket haul. The Lankan side were asked to follow on and were once again dismissed for 178 runs, handing India the victory by an inning and 222 runs.

Watch: Virat Kohli gifts Indian team’s T-Shirt to a physically challenged fan waiting outside
Watch: Mitchell Starc gets a dose of his own medicine after Shaheen Afridi dismisses him with an in-swinging Yorker
To Top