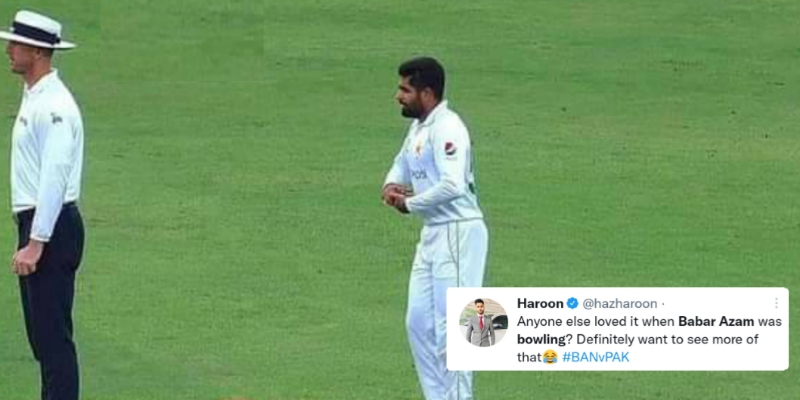 Pakistan cricket team captain Babar Azam achieved another feat in his glorious career so far. Babar, who is mostly known for his batting, tried himself out with the ball against Bangladesh.

As you all might know, the Pakistan cricket team is currently in Bangladesh playing 2 match Test series against the host nation. There were also 3 T20I scheduled as part of the series, which in the Men in Green won.

That was followed by Pakistan winning the 1st Test match dominantly against the Bangla Tigers. The 2nd Test match is currently ongoing, however, half of the match was ruined by rain in Bangladesh.

Pakistan batted first and posted 300 runs for 4 wickets before they declared their inning. Bangladesh got all out for 87 runs only.

However, the most interesting thing that the fans witnessed was that the Pakistan cricket team’s skipper Babar Azam, who is renowned for his batting, tried his luck with the ball.

It was during the Bangladesh’s first inning when the Bangla Tigers had already lost 7 wickets for 75 runs, when Azam took the ball on his hand. He bowled the 26th over of the match and gave away only 1 run.

Drinks was called after that, after which, due to light issues, the umpires called stumps on Day 4.

Talking about the match, the match got completely disrupted by rain throughout. Batting first, Pakistan declared for 300 runs. Azam scored 76 runs, and got great contributions from Azhar Ali (56 runs), Fawad Alam (50 runs) and Mohammad Rizwan (53 runs).

Bangladesh batsman had no answer to Pakistan’s bowling as they could only score 87 runs with Sajid Khan taking 8 wickets. However, the moment when Babar Azam took the ball to his hand, will always be remembered for this match.

Here’s how Twitter reacted to Babar Azam bowling against Bangladesh

This is one exceptional over by Babar Azam, Yes you heard it right. Babar Azam bowls his first over in Int’l cricket and almost got his first test wicket.

Setting an example for his troops, this is how you go for a result out of nothing, My Captain ❤️ #BANvPAK pic.twitter.com/8yBLnkRbS4

In case if you are wondering what made Babar Azam bowl himself, He just got a 10-for recently with 3 of them getting caught at slips.

There’s nothing he can’t do 👑 🐐 pic.twitter.com/IdeYP8XiLl