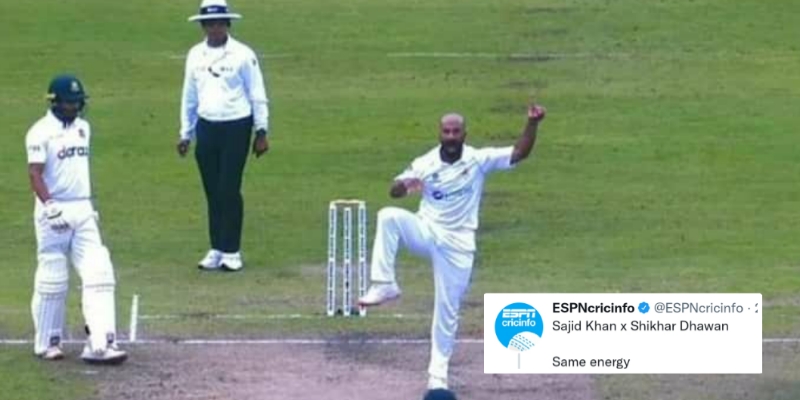 The Pakistan cricket team captain Babar Azam won the toss and decided to bat first. The decision worked in Pakistan’s favor although there were rain interruptions during the first innings. Half-centuries from Babar, Mohammad Rizwan and Fawad Alam powered the visitors to a 300-run score. Pakistan declared their first innings at 300/4 and tried to go for a win.

Many fans noticed during the Test that Sajid celebrated like Indian batter Shikhar Dhawan. He did a Thigh 5 after taking a wicket, and the video of the celebration has gone viral. Here’s how Twitter reacted to it.

Just check the jubilation style of #SajidKhan after taking the wicket 👏#PakvsBan pic.twitter.com/bttdfgCt3O

Maiden Five wicket haul by Sajid Khan and what time to bring it ❤🔥🔥
Superb display of bowling by mustache king😍😍#BANvPAK #PakvsBan #CricketTwitter pic.twitter.com/jedI6tfcVO

Is it Me or is it, Sajid Khan looks like Shikhar Dhawan?😂😂😂😂😂 #BANvPAK

To be fair…sajid copying shikhar looks quite odd to me! Like it feel awkward seeing him celebrate like how shikhar does