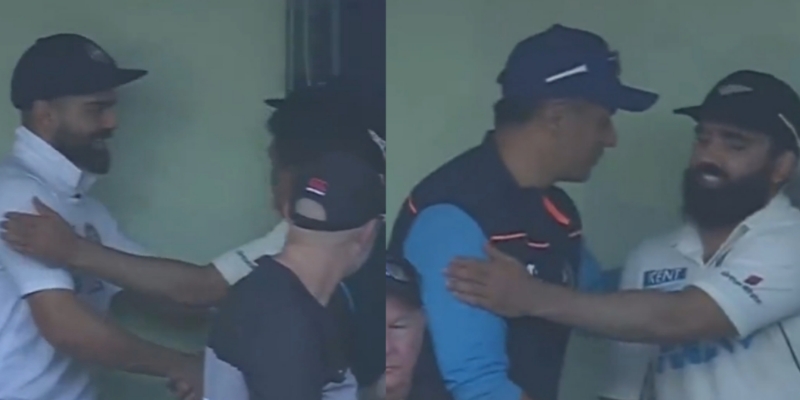 The 2nd day of the India vs New Zealand Mumbai Test match happened earlier today at the Wankhede Stadium in Mumbai. The day belonged to the Indian cricket team. Mayank Agarwal’s 150-run knock and some excellent bowling performances from the Indian bowlers helped the home side post a 325-run total on the board in the first innings. Ajaz Patel was the only New Zealand bowler who could take wickets in the first innings.

Ajaz opened his account by taking the wicket of Shubman Gill. Soon, he added the wickets of Cheteshwar Pujara and Virat Kohli to his tally. Shreyas Iyer was his fourth scalp. These four wickets fell on the first day of the Test match at the Wankhede Stadium.

Fans lauded the gesture shown by the Indian captain and the Indian head coach. Here are some of the Twitter reactions to it:

Rahul Dravid and Virat Kohli coming to you and appreciating your effort, that should make anyone’s day. It’d make my week, month, and year.

Virat Kohli and other Indian players congratulated Ajaz Patel for his 10 wickets after the day’s play. #INDvNZ pic.twitter.com/nkWyslz0jn

Virat Kohli went to the NZ dressing room to congrats ajaz patel for his 10 wicket haul!
Aggressive on-field humble off the field
THAT IS VIRAT KOHLI! pic.twitter.com/jYJmeV4kOd