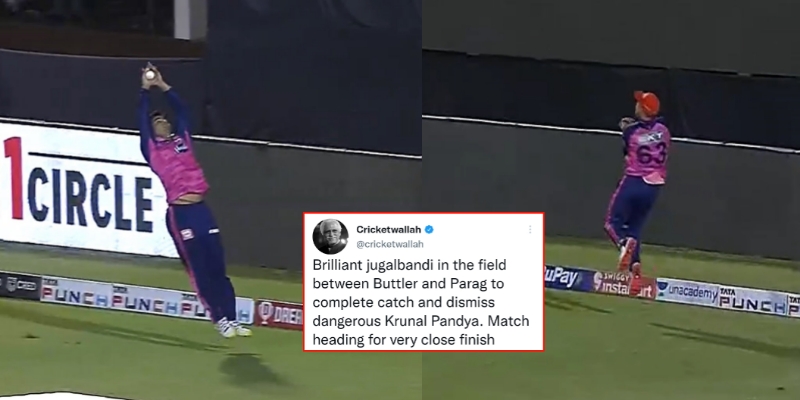 Brilliant tag team action was on display on the ground tonight as Jos Buttler and Riyan Parag combined together take a spectacular boundary line catch in the match against Lucknow.

Match number 63 of the Indian Premier League (IPL) 2022 is being played between the Rajasthan Royals and the Lucknow Super Giants, as both vye to confirm their top 4 entry.

Winning the toss Rajasthan Royals captain Sanju Samson opted to bat first, and put on a target of 179 runs for Lucknow Super Giants.

While the start was not so fruitful for the Lucknow Super Giants, losing 3 wickets for the score of 29 runs, Deepak Hooda and Krunal Pandya showed them a new ray of hope by adding a fighting partnership.

But, it was at that time when Jos Buttler and Riyan Parag produced something really great on the boundary, combining together to take a perfect catch of Krunal Pandya.

Krunal hit a shot down the straight but Buttler reached and caught the ball, but knew that he was close to the boundary line so threw the ball inside towards Riyan Parag, who made no mistake.

Fans also louded the duo for their partnership on the field, which played a major role in the team’s win.

Brilliant jugalbandi in the field between Buttler and Parag to complete catch and dismiss dangerous Krunal Pandya. Match heading for very close finish

Brilliant catch by Jos Buttler and Riyan Parag😍😍
One of the best option for Catch Of The Season Award.#RRvsLSG #IPL2022 #IPL #iplclicks #LSG #HallaBol pic.twitter.com/9h5bmyorYY