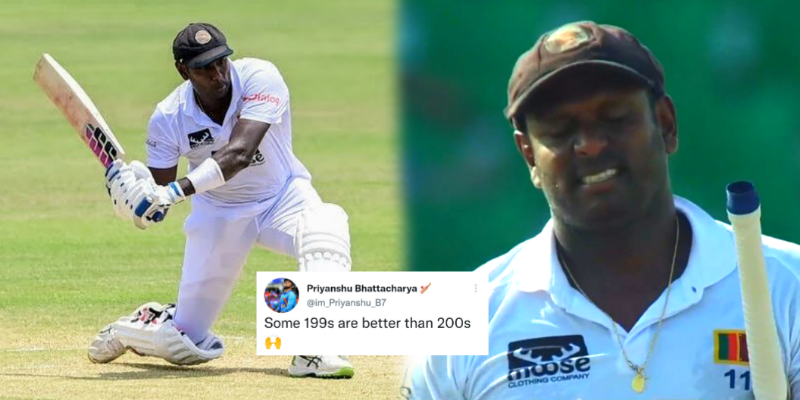 Sri Lankan batsman Angelo Mathews missed out on a well deserved double hundred by just 1 run during the 1st match against Bangladesh.

The first of the scheduled two match Test series as part of Sri Lanka’s tour of Bangladesh began yesterday, on the 15th of May, but Sri Lanka struggled with early blows.

But it is the veteran batsman Angelo Mathews displayed his experience, playing a crucial inning for his team. But unfortunately for him, he missed out on a well deserved double hundred when he was dismissed for 199 runs by Nayeem Hasan.

Mathews comstructed the inning from 319 balls, that also included 19 fours and 1 six. He became the 10th wicket of Sri Lanka’s inning as the Island was dismissed for a total of 397 runs.

Twitterati took to Twitter to react to Mathews’ inning. Check out what they tweeted.

Unlucky, Angelo Mathews dismissed on 199, missed out his second double hundred by one run – he scored 199 runs from 397 balls including 19 fours and 1 six. Well played, Mathews.

Heartbreak for Angelo Mathews as he falls for 199!

Nayeem finishes with six wickets as Sri Lanka are bowled out for 397.#WTC23 | #BANvSL | https://t.co/nDHiGIwALx pic.twitter.com/YJy0aI7UQX

Despite being a Ban fan, I'm feeling bad for Angelo Mathews 😢

Angelo Mathews becomes the first player to be dismissed on both 99 and 199 in Test cricket.

So close, yet so far!

Angelo Mathews, the old warhorse of Sri Lankan cricket, missed his double century by a whisker. This man is so amazing even in the fag end of his career.#CricketTwitter pic.twitter.com/898rEn2rnJ