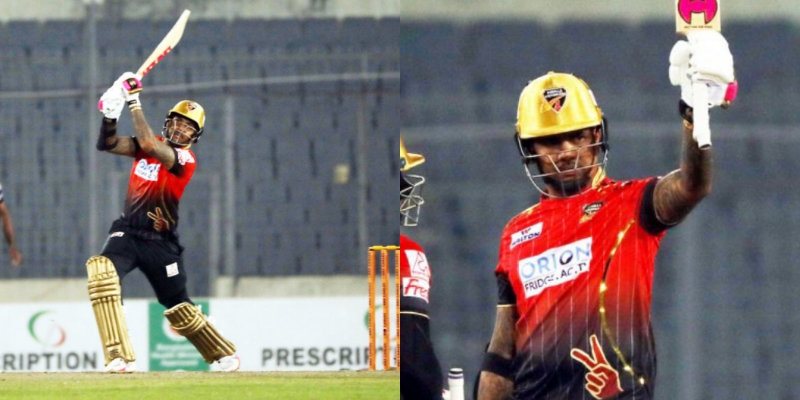 Bangladesh’s premier T20 league, the Bangladesh Premeir League (BPL) is currently ongoing in the country with 6 teams participating in the competition.

But before that, in the semi-final clash between the Comilla Victorians and the Chattogram Challengers, West Indies all-rounder Sunil Narine smashed a brilliant 57 runs from 16 balls.

But truly was brilliant that Narine completed his fifty in just 13 balls. Narine was once again promoted to open the inning for his side. And it is probably known to everyone that when Narine opens the inning, you know what his role is.

Opening the inning alongside Liton Das, Narine collected 18 runs from the first over after losing Liton’s wicket in the first ball of the inning. He then took on Mehidy Hasan in the next over, smashing him for 22 runs in 4 balls.

He completed his half-century with a big Six in just 13 balls. He was finally dismissed on the last over of the powerplay by Mrittunjoy Chowdhury. But he had already done the damage as Comilla won the match in just 12.5 overs.

With the Indian Premier League (IPL) on its way, this is a great sign for the Kolkata Knight Riders (KKR) team and its fans as the West Indies and KKR legend was retained by the franchise before the IPL 2022 Mega Auction.

Sunil Narine madness – fifty from just 13 balls – one of the greatest T20 player in the history of the game.pic.twitter.com/NzQMm1bKig

Four overs of spin in the Powerplay against Sunil Narine. Criminal mistake. Batting on 47* off just 12 balls. #BPL2022

Venkatesh Iyer can Strike at 180+ in Middle Order …

Sunil Narine can Strike at 300+ in Opening …