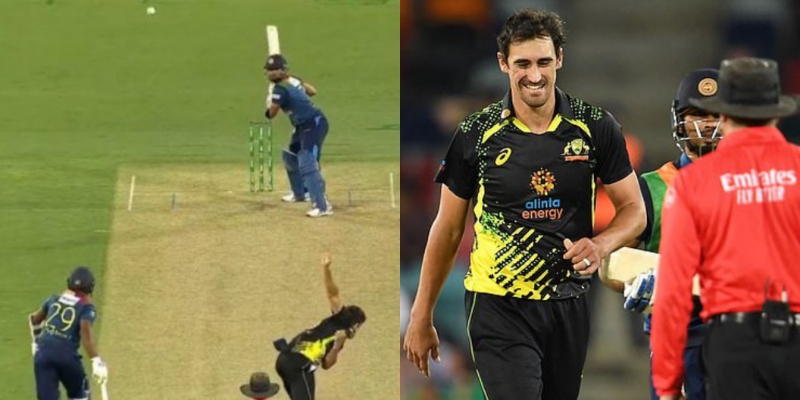 Australian pacer Mitchell Starc is widely as world’s one of the greatest pace bowler, who can consistently hit 150 KMPH. But the Australian pacer didn’t had a great moment in the 3rd match of T20I series against Sri Lanka.

The Australian cricket team is currently playing a 5 match T20 International (T20I) series against the Sri Lankan cricket team and the 3rd match of the series was played today in Canberra.

While Australia won the match, the Australian team’s premium pacer Mitchell Starc did not had a great match with the ball, giving away 30 runs from his 4 overs, and not taking a single wicket. Added to that, he probably bowled the most wildest delivery of his life.

Cricket fans witnessed something really unusual from a pacer of the quality of Mitchell Starc. It was during the 18th over of the Sri Lankan inning when Mitchell Starc bowled a 3 meeter height wide ball, that even the keeper Matthew Wade couldn’t stop.

Talking of the match, it was a low scoring inning from the Sri Lankan side after were asked to bat first. Sri Lanka could only put 121 runs on the board as Kane Richardson took 3 wickets in that inning.

Chasing the 122 runs target, Australian batsman made sure that they take it easy and guide the team over the boundary line. Australia scored 124 runs from 16.5 overs, insuring a 6 wickets victory, as well as series victory with 2 matches to be played.

However, the match may be mostly remembered for Mitchell Starc’s wildest ball ever seen.

Not the greatest delivery Mitchell Starc has ever bowled… 😂#AUSvSL pic.twitter.com/zkODpSEatA

Nothing, just Mitchell Starc missing his yorkers by some yards. pic.twitter.com/F5SvBF90XU

Steve Harmison’s first ball of the 2006 Ashes was the widest ball ever bowled!