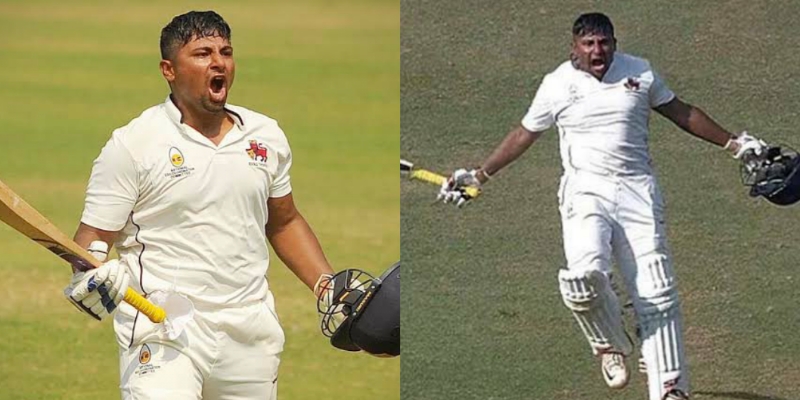 Mumbai’s middle-order batsman Sarfaraz Khan is getting all the attention right now after scoring a brilliant 275 runs from 401 balls in the Ranji Trophy 2021-2022 match against Saurashtra.

Players were eager to showcase their talent, and when they got the opportunity this time, they are showcasing their talent to the world. And one such player is Mumbai cricket team’s middle-order batsman Sarfaraz Khan.

Sarfaraz Khan was criticised a lot due to his form in the early stages of his career, but has since then showcased some unreal consistency, where he has scored 3 double centuries, including 1 triple century, in his last 9 inning in the Indian Ranji Trophy.

He continued his class batting today as well, from resuming from an overnight hundred and converted that to mega double hundred.

In the opening match of the season for Mumbai, Sarfaraz Khan played a very crucial knock for the team after once found themselves in a very position. Sarfaraz and Ajinkya Rahane both worked together to reconstruct the Mumbai inning.

While Rahane was dismissed for his individual score of 129 runs, Sarfaraz Khan kept on going and reached double hundred. He was finally dismissed by Prerak Mankad for 275 runs. But he had already done his job, as Mumbai ended the day’s play with 544 runs on the board for the loss of 7 wickets.

What a streak from Sarfaraz Khan in the Ranji Trophy! Been awesome last few games. Good to see him realise the potential he has.

Sarfaraz Khan scores a magnificent 150 in 299 balls with 19 fours and 2 sixes. He's been a heavy run scorer for Mumbai now, a brilliant innings.

Sarfaraz Khan misses out on a triple hundred. I remember this boy had worked really hard on his fitness and was scoring tons of runs in domestic but then Corona arrived …
He has started again his journey well. #RanjiTrophy #Sarfarazkhan

Sarfaraz Khan is forcing the selectors to look at him.

One has to be cricket blind to ignore him right now.

For all he has done in last two years, he deserves a place in squad for SL tests!

Get ready for redemption of Sarfaraz Khan

He is so damn talented and hopefully he can fullfill his potential at Delhi Capitals!!!#DelhiCapitals #SarfarazKhan #Sarfarazkhan