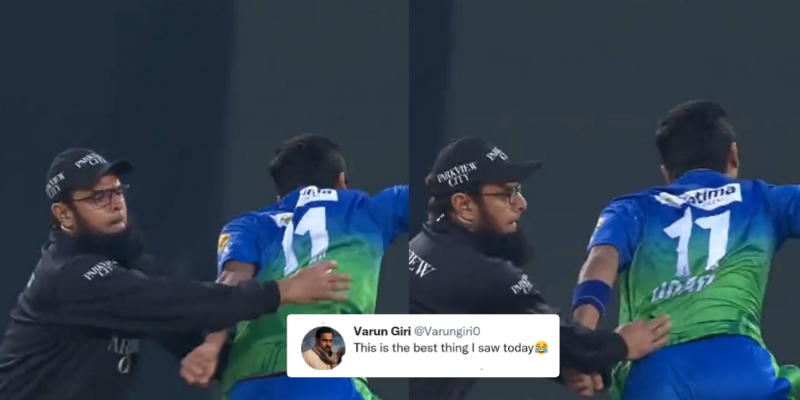 The 25th match of the Pakistan Super League (PSL) 2022 was played between the Multan Sultans and the Quetta Gladiators on Friday, February 18th, which the Multan based team won by a huge margin of 117 runs. But what was the most amazing about the match was when umpire Aleem Dar tried to intervene bowler Shahnawaz Dahani’s celebration.

But keeping aside the match, what more caught the eyes of the cricket fraternity is when on-field umpire Aleem Dar tried to interfere in bowler Shahnawaz Dahani‘s celebration after taking a wicket.

This incident happened in the 14th over of the Quetta Gladiators innings. Sarfaraz and Naseem were on the crease for the Gladiators and Shahnawaz Dahani was bowling for the Sultans.

The fourth ball of the over saw batsman Naseem Shah was absolutely stunned and the ball hit the stumps. After the bells trumble, Dahani could not stop himself and started running on the field in his familiar style. But in the midst of this celebration, umpire Aleem Dar tried to interfere and stop him, the funny video of which is now going viral on social media.

The story behind this is that Dahani had also run like this on the first ball of the 14th over when he dismissed Noor Ahmed. He had run to boundary line after taking the wicket. And sensing that he would do the same again, umpire Aleem Dar tried to stop, but didn’t succeed in his deed. The video of the same has gone viral on the social media.

Well, the performance of umpire was more entertaining than QG. Aleem Dar just displayed slick football moves and was about to rugby-tackle Dahani..

Aleem Dar couldn't but I'm sire @ImranTahirSA could have stopped him.
🤣🤣#PSL2022 https://t.co/fBHETX2Ps0

#LQvsKK
Totally in love with this moment between aleem dar and shahnawaz dhani💕. What a gesture of love he had shown🥺. Aleem dar you beauty 💕. Psl is totally the reason of happiness for me.#QGvMS pic.twitter.com/OOqD0jMQz5

He took a wicket before this and ran to sir viv richards.. he ran again this time and as a joke sir aleem dar was trying to stop him 😁