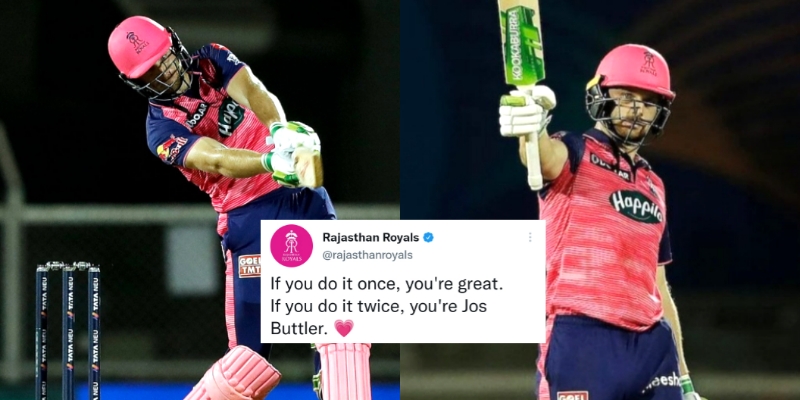 Match number 30 of the Indian Premier League 2022 is being played between the Rajasthan Royals (RR) and the Kolkata Knight Riders (KKR) in Mumbai’s Brabourne Stadium.

And it was all Jos Buttler special as the English continues to prove why he is the best overseas player currently playing in the Indian Premier League.

Shreyas Iyer won the toss and opted to ball first. However, their bowlers couldn’t stand-up to his decision as they struggled to take wickets. And Jos Buttler took full advantage of that.

Even though he started slowly in the first two overs, but once he got going, was there anyone to stop him. Kolkata Knight Riders managed to get their first wicket when they were at 97 runs.

But, that still didn’t disturb Jos, he still kept the throttle on and finally scored his 2nd century of this year’s Indian Premier League (IPL) 2022 season from 59 balls.

But he was dismissed finally by Pat Cummins after scoring 103 runs. However, the fans were so hyped to see Buttler smashing the balls out of the park.

Second hundred for Jos Buttler in #IPL2022 – the consistency is remarkable from the boss and completes his hundred with a six. What a player, Jos. pic.twitter.com/ZOp3SzWok2

I thought I would take a holiday from cricket today. Noticed that Jos Buttler has put on a show. Back watching!

He is THE PUNISHER #josbuttler 💯 👏

The last time we witnessed such unrestrained dominance was Kohli in 2016. Take a bow Jos🙇‍♂️#josbuttler #IPL2022 pic.twitter.com/HkJ1AEQJXZ

Yet another sensational knock. What a consistency. What a Player Jos Buttler ! pic.twitter.com/j7tpLChnmG

Boss is dominating this format like a boss .. played great innings in T20i Wc & now in this IPL season . 2nd century in this IPL season , warra player he is . Absolutely a genius 🔥@rajasthanroyals | @josbuttler pic.twitter.com/1xvQtnejQ3