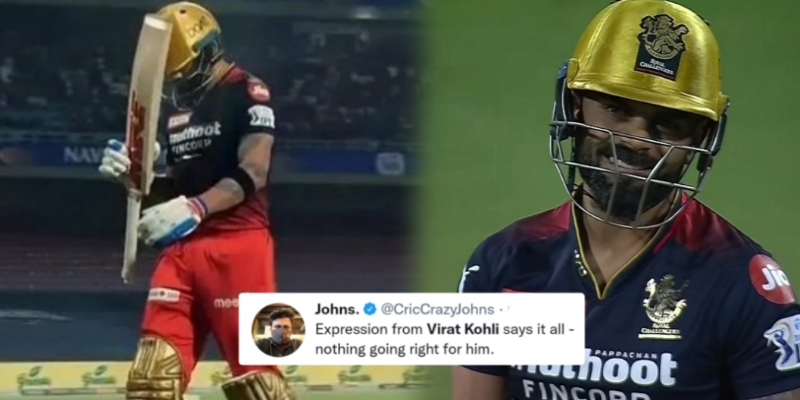 The pain for Virat Kohli fans and the Kohli’s bad run of form is just not ending as the India’s batting star could not even opening his account in tonight match against Lucknow Super Giants.

KL Rahul won the toss for Lucknow and asked Bangalore batsmen to the crease first. And Rahul’s decision to bowl first was proven quite so right by their bowlers.

Lucknow Super Giants pacer Dushmantha Chameera bundled up two wickets in two balls towards the end of the first over of the match. The two wickets included of Anuj Rawat and Virat Kohli.

While Rawat scored 4 runs before was dismissed, Virat Kohli had to return to the pavilion of the very fast ball that he played, without opening his account.

Virat Kohli is currently going through a very bad run of form and the crowds and his hates to see it. While normally Virat Kohli would have easily scored more than 200 runs so far in the competition, he is currently stuck at 119 runs.

Expression from Virat Kohli says it all – nothing going right for him. pic.twitter.com/5DHhI6gYXY

RCB’s fans stunned when Virat Kohli got out on his first ball. pic.twitter.com/Ub1ElXjOUC

Imagine waiting whole day to see Virat Kohli bat and then,he is gone for a duck and gives a disappointing smiles like this 🙂 pic.twitter.com/czyfP6NXFz

Feeling Sad For The Legend Kohli
Can Virat Kohli Make Another Century In His Career..!!🥺🤔#IPL2022 | #RCBvsLSG pic.twitter.com/jArhoJBsTK

I don’t know what’s happening but Virat needs to come back, at some point. He can’t prove those who think virat is ‘finished’ right.

It’s VIRAT KOHLI. He knows what he needs to do. He will do it.#Viratkohli #Goat #RCBvsLSG