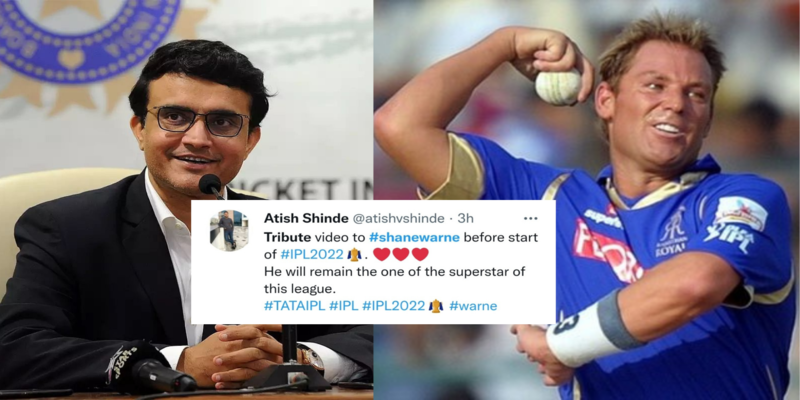 The first match of the Indian Premier League 2022 is under way between Chennai Super Kings and Kolkata Knight Riders. An IPL match is full of action and excitement and it is amongst the most watched sports events in India. But something else caught the eyes of the world. And it was a special gesture from the Board of Control for Cricket in India (BCCI) to the late Shane Warne.

The first match of the 15th edition of the IPL 2022 started with a tribute to Australian spine legend and the inaugural IPL winning team captain, Shane Warne. The spin legend was the first ever captain to win the IPL title in the 2008 season. He led the Rajasthan Royals to a title triumph without having any big names in his team.

Warne was part of the cash-rich league until 2013. And it was his captaincy that changed the way to lead a team in the IPL. He helped the inexperienced team and made them the champions. Arguably, Warne was the reason behind the rise of some of the big names, like Yusuf Pathan, Ravindra Jadeja, and Shane Marsh. Later, he was also associated with RR as a mentor.

On March 4, when the leg-spinner left the world at the age of 52. He was on vacation in Thailand with his friends. He was found unconscious in his room and was rushed to the hospital. Later, he was declared dead due to a suspected heart attack. The news of the sudden death of the Australian legend shocked the world.

Fans reacts to the special gesture of BCCI towards Shane Warne

Warne was an exciting character both on and off the field. And he lived his life to the fullest. Fans, cricketers, and whoever knows something about cricket gave tributes to the Australian legend. On the other hand, fans also praised the BCCI for their special gesture towards Shane Warne. Twitterati were also eager to share their thoughts.