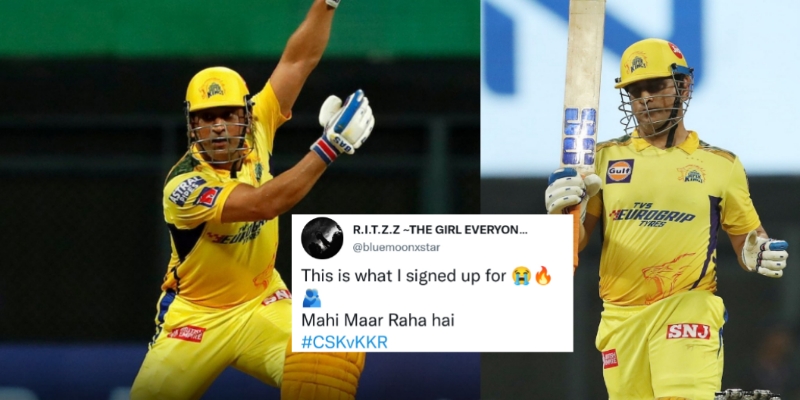 You all must have heard the phrase ‘Mahi maar raha he’, that was what the case was tonight when MS Dhoni took control of Chennai Super Kings inning, which was under a big problem, and finished off the inning with a great fashion, scoring a 50.

The Indian Premier League (IPL) 2022 season got off to a great start as Chennai Super Kings (CSK) battles Kolkata Knight Riders (KKR) in the opening match of the tournament.

However, it was not a great start to the match for the Chennai based yellow army as they were in deep trouble before MS Dhoni took the boat to the shore.

Batting first, after the coin fell against Chennai’s new captain Ravindra Jadeja, CSK added 131 runs on the board. But it could have been worse if not for MS Dhoni.

Umesh Yadav was in hot form today, dismissing both Ruturaj Gaikwad and Devon Conway inside the powerplay, for 28 runs. They further lost wickets as they were reduced to 5 wickets for just 61 runs.

However, MS Dhoni and Ravindra Jadeja carried the inning. MS Dhoni showcased the old self of himself as he scored a brilliant fifty. Even though he started slow, but when got going, there was no stopping.

Kolkata Knight Riders (KKR) now needs 132 runs to win the match and get off to a good start in the campaign. But the first inning was all about MS Dhoni.

Twitter went berserk as MS Dhoni gave them a vibe of the old MS Dhoni.

Mahi maar rha hai.#THALA IS BACK!!

When the going gets tough, the tough gets going 🦁💪 #Mahi #50NotOut pic.twitter.com/NIZ6Ntt6nq

I always believed in #CSK, and i always will!!
Because of one man…..#mahi bhai 🙌
Vintage Dhoni is backkkk babbeeeeeee ❤️❤️❤️❤️❤️❤️❤️❤️❤️ pic.twitter.com/NFHdNIbaNt

So happy to see him like old Dhoni.. #MSDhoni is back😎😎.Once a captain.. always a captain 💛.
first day he showed who he is …whom he known for …Treat to watch ..vintage dhoni ..for atleast one more last time.#MSDhoni𓃵#CSKvsKKR#IPL2022 #mahi #WhistlePodu pic.twitter.com/K1mc4swoby