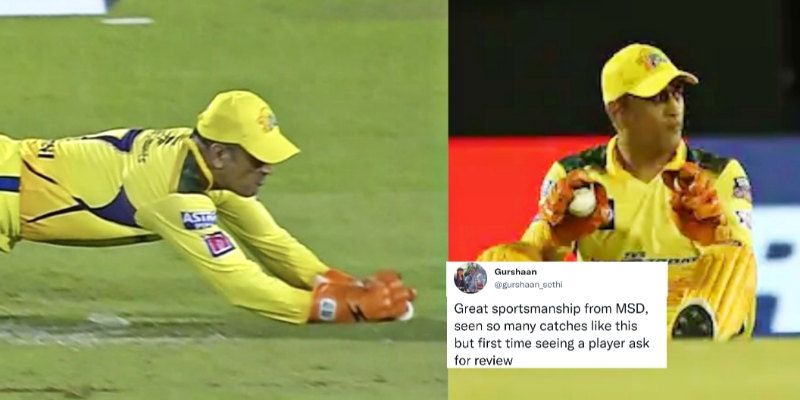 Well, he maybe 40-years-old right now, but MS Dhoni has got off to a great start in the ongoing Indian Premier League (IPL) 2022, not only with his bat, but also behind the stumps, showing athleticism like he is a 25 years old.

Chennai Super Kings suffered another defeat in their Indian Premier League (IPL) 2022 campaign, losing to Punjab Kings yesterday night, which is now their 3rd straight defeat in the IPL 2022.

While many a things have not gone their way, certainly one thing is by their side, and that is Mahendra Singh Dhoni’s form. MS Dhoni has looked in good form in this year’s IPL.

Dhoni relinquished from his position as the team’s captained and handed the duty to Ravindra Jadeja before the start of the IPL 2022. And that certainly has helped him. He played a very important role in the team’s first match against Kolkata Knight Riders, scoring a fifty. He then displayed some attacking cricket again in the next match. And most recently, he was trying hard to build the inning, but was dismissed after a brave DRS call.

However, not only with bat, but MS Dhoni this season has been contributing from behind the stumps as well, and one may remember the Rajapaksa run out from yesterday’s match.

But other than that, there was another moment in the match when Dhoni took a left-handed catch of Liam Livingstone, but was doubtful of whether it was a clean catch, thus asked the on-field umpire to check, and it turned out that while Dhoni had the ball by his fingers tips, the ball still touched the ground and declared not. And that decision led to Liam Livingstone playing a match winning knock.

Fans on Twitter heaped praise on the former Indian skipper for his Spirit of the Game and honesty.

Looks it just popped out of MS Dhoni's gloves while completing the catch. pic.twitter.com/ULnPFIW0mZ

A younger Dhoni might have had the extra inch of speed to get to this cleanly. Few keepers would have even stopped it. MSD asked for the review, honest cricketer. #CSKvsPBKS #IPL2022 pic.twitter.com/Wikq2YVmnc

"He is so honest dhoni" screams Simon Doull. As Dhoni claims a catch that clearly rolled along the floor before he picked it up and claimed the catch #ipl #cricket

Dhoni drops a catch.. trust the commentators to praise Dhoni how he’s so honest in accepting that he spilled it..
Vintage Dhoni..😍

Great sportsmanship from MSD, seen so many catches like this but first time seeing a player ask for review

“No matter how old, the lion never forgets to hunt” – Twitter reacts to MS Dhoni showing off his old shades behind the stumps against Punjab Kings
“Thank you Legend” – Twitter bids emotional farewell to Ross Taylor on his last International match
To Top