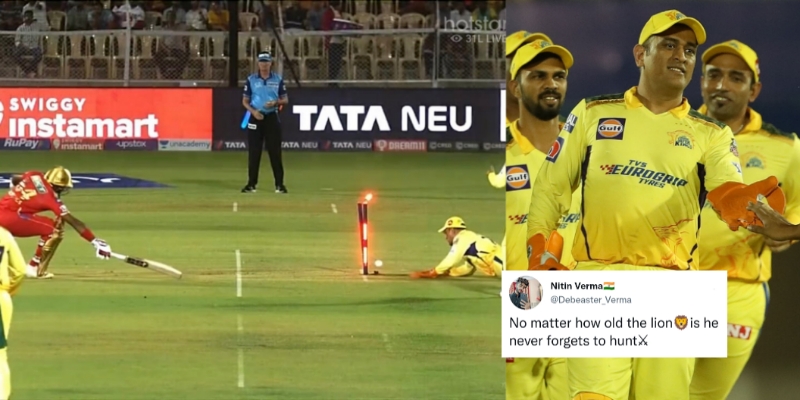 ‘Age is just a number,’ the popular catchphrase is proved right again as the 40-years-old MS Dhoni brought back his own self to pull out a stunning run out to dismiss Sri Lankan batsman Bhanuka Rajapaksa in IPL 2022.

Match number 11 of the Indian Premier League (IPL) 2022 is currently ongoing and is being played between Chennai Super Kings (CSK) and Punjab Kings (PBKS) in Mumbai’s Brabourne Stadium.

Both the teams are looking for a win here to bring back their campaign back in track as CSK have lost both of their opening 2 matches, whereas Punjab has lost 1 and won 1.

Ravindra Jadeja, the man leading the yellow army, won the toss and as usual, opted to bowl first. Mukesh Choudhary strike early as Mayank Agarwal was caught in just 2nd ball of the inning, once getting out in the first over the match.

Mayank’s wicket brought in Sri Lankan batsman Bhanuka Rajapaksa into the crease. He started off his inning carefully, unlike the previous two matches.

Then in the first ball of the 2nd over, he hit Chris Jordan for a six behind the wicketkeeper. The very next ball, he just guided the ball and wanted to single, however, his partner on the other end, Shikhar Dhawan only focused on where the ball was going, and didn’t saw Rajapaksa coming.

Rajapaksa then had to run back towards his inning, but when you know that you competing with MS Dhoni, its not gonna be easy as MSD brought in old self and produced another of those electrifying run out behind the stumps.

Twitter went bonkers as MS Dhoni pulled off the run out. Here’s how Twitter reacted to MS Dhoni run out Bhanuka Rajapaksa.

Who said @msdhoni is aging and can not play any more ??#MSDhoni #IPL2022 #CSKvsPBKS pic.twitter.com/9CgQB72tVV

Dhoni sprinting from behind the stumps and inflicting a run out with a dive. He can still do it at 40.

Age is just a number.! Ms Dhoni prove it again.! The best wicket-keeper in the world.#MSDhoni | #CSKvsPBKS | #CSK pic.twitter.com/wIbxUSypAj

Don’t dare to say that Mahi is old
No buddy no he is super fit🔥👏👌
Excellent work by Mahi ❣️👌#CSKvsPBKS pic.twitter.com/93nCQaUzF6

If you are the batter, you are still unlikely to beat Dhoni.pic.twitter.com/KfZNG6hxsO