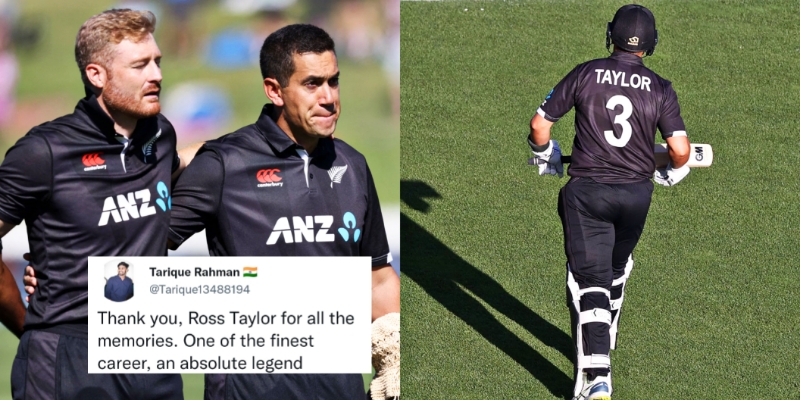 New Zealand team’s star batsman Ross Taylor has been ever reliant and ever present for the Blackcaps, but today, the legend is taking the field for the one last time before he bids adieu to the game that we all love.

The 3rd and the final match of the 3 match One Day International (ODI) series between hosts New Zealand and Netherlands is the final ever series for Taylor and New Zealand is looking to give him a good farewell.

New Zealand has already won the series having won the first 2 matches and is just looking to complete the clean sweep over the Dutchs. But this has not turned out to be a good series for Taylor, as he only scored 26 runs from the 3 matches.

He took the field for the very last time today in the third ODI, and couldn’t control his emotion and got emotional during the national anthem. He scored 14 runs today from 16 balls before was dismissed by Logan van Beek for the final time in his career.

End of Ross Taylor in International cricket, he was dismissed for 14 runs, nice from Netherlands players not to celebrate after the wicket. Thank you, Taylor.

Ross Taylor sticks out his tongue one last time ❤️ cherish it pic.twitter.com/GcS3Rk0Y1S

Thank you, Ross Taylor for all the memories. One of the finest career, an absolute legend. pic.twitter.com/80jpCDvT2I

Best wishes for the future ahead, Ross Taylor. One of the greatest blackcaps player, supreme middle order batsman.
Wish, we could have seen more of you. https://t.co/JcQU72uoBN

The backbone of NZ’s batting lineup along with Williamson over the last 10 years. Thank you, Ross Taylor.