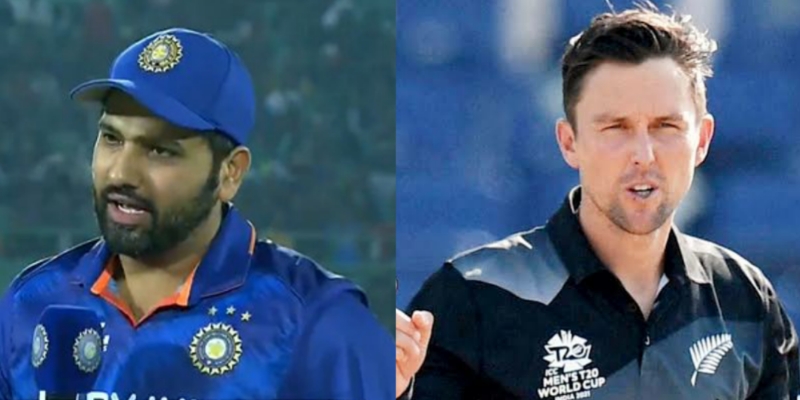 The India vs New Zealand T20I series began yesterday in Jaipur. In the first T20I of the 3-match series, the Indian cricket team beat the New Zealand cricket team by five wickets. It was Rohit Sharma’s first T20I as India’s full-time captain in the shortest format of the game. Also, it was Rahul Dravid’s first match as India’s full-time head coach. Trent Boult dismissed Sharma in the match.

Rohit Sharma first won the toss and decided to bowl at the Sawai Mansingh Stadium. It was the first-ever T20I match at the venue, and the New Zealand side got off to a disappointing start. Pace bowler Bhuvneshwar Kumar rattled the stumps of in-form Daryl Mitchell on the third ball of the match. But Martin Guptill and Mark Chapman then brought the Blackcaps back into the contest by scoring a fifty each.

India dismissed both batters before the death overs and pulled things back to restrict the Kiwis to 164/6 in their 20 overs. India got off to a fantastic start with the bat as KL Rahul and Rohit Sharma had a 50-run partnership off just 31 deliveries. Rahul got out but Suryakumar Yadav and Rohit took India closer to the target.

Boult knows my weakness and I know his strength: Rohit Sharma

Just when it looked like Yadav and Sharma will win it for the Indian cricket team, Trent Boult dismissed both of his Mumbai Indians teammates. The match went down to the final over, where India prevailed ultimately. After the match, Rohit had the following to say about his dismissal to Boult and how he bowled a very short delivery to dismiss him.

“We (Boult and I) played a lot of cricket together and he knows my weakness and I know his strength, it’s a good fight between the two. When I captain him I always tell him to bluff, and that’s exactly what he did.”