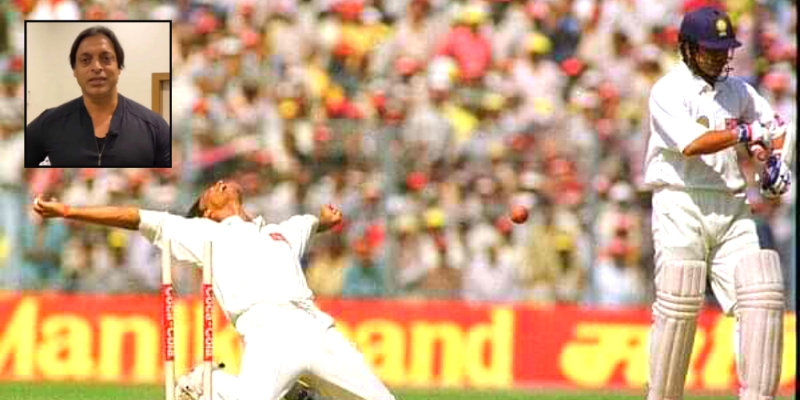 Shoaib Akhtar has made a big disclosure about his plan to get Sachin Tendulkar out on the first ball of a Test match at the Eden Gardens in 1999. Pakistani fast bowler Akhtar came into limelight with his eight scalps in the Asia Test Championship against India, but in that Test match, he he garnered huge interest after dismissing Rahul Dravid and Tendulkar in two consecutive balls.

The Rawalpindi Express also revealed how the legendary Wasim Akram helped Tendulkar get his wicket in that match. Akhtar clean bowled Dravid and then had a brief conversation with Akram. Akram asked the pacer to keep the ball in the stump line and reverse swing and Akhtar did the same. It was the first ball he bowled to Sachin and Tendulkar got out there.

In a video shared on Sportskeeda, Shoaib Akhtar said that while Sachin was getting ready to take the strike, Wasim Akram advised him to bowl reverse swing and to make sure the ball ends in the stump line.

He further said that, as soon as Sachin raised his bat, he knew that Sachin was going to get out. He said that Sachin’s backlift was really high and he knew that the ball would reserve swing a lot and thus, he was not surprised when he got Sachin’s wicket.

Shoaib also said in the end that when he got Tendulkar out, there was silence in the entire stadium. He added that after the great Almighty, it is Sachin Tendulkar who played a big role in his career, because he believes that had he not got Sachin’s wicket, nobody would have recognised him.

“I was not surprised and you would see that. After the almighty, it is probably Sachin who made me a star because of that incident,” said Akhtar.