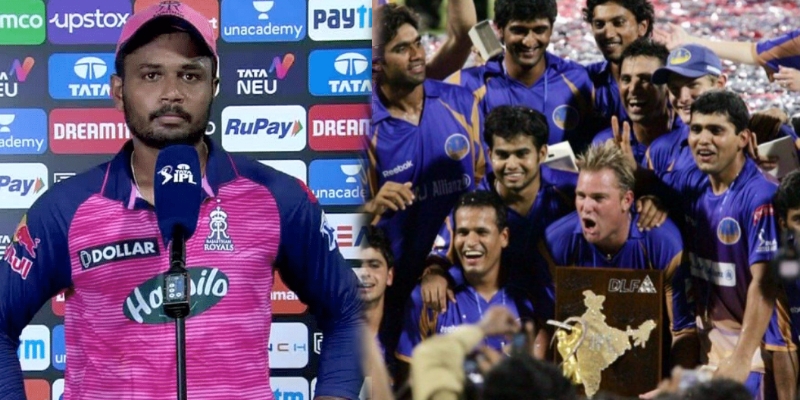 It will be a moment to cherish for the Rajasthan Royals skipper Sanju Samson, who will be leading the team in the Indian Premier League (IPL) 2022 final, having seen the legendary Shane Warne guiding them to the Trophy in the inaugural season.

Rajasthan Royals overcome the Royal Challengers Bangalore (RCB)’s challenge in the Qualifier 2 of the Indian Premier League (IPL) 2022 to book a slot in the final against the Gujarat Titans, to be played on the 29th May.

It will be Rajasthan Royals’ 2nd only attempt at the IPL Trophy, having won the Silverware in its first attempt in the inaugural season of the tournament, when Shane Warne led to the success.

But, while maybe a great occasions for the Rajasthan Royals, unfortunately for them and the entire cricketing action, the legendary cricketer won’t be watching the match from the stadium.

In a tragic incident, the former Australia and Rajasthan Royals cricketer passed away at the age of just 52 on the 4th of March. Warne was thus far the only captain to guide them to the IPL final, but Sanju Samson has now joined the list.

Sanju Samson, who joined the Rajasthan Royals in the year 2013 as a youngster, was made the captain during the IPL 2021 season. He Kerala born cricketer has shared the backstory of watching Shane Warne lifting the trophy.

While talking in the post-match show, Sanju Samson said that he was very young and was playing U-16 matches in Kerala and saw Shane Warne and Rajasthan Royals lifting the IPL Trophy in 2008.

“I remember watching the last game with my friends and remember that last run where Shane Warne and Sohail Tanvir hit the run and they were running, it was a very vague memory which I have,” said Samson.

“The No.1 white-ball player in the world” – Twitter lauds Jos Buttler after his fantastic century against RCB in the Qualifier 2
“We will miss him dearly”- Jos Buttler dedicates IPL 2022 Final qualification to first Royal captain Shane Warne
To Top