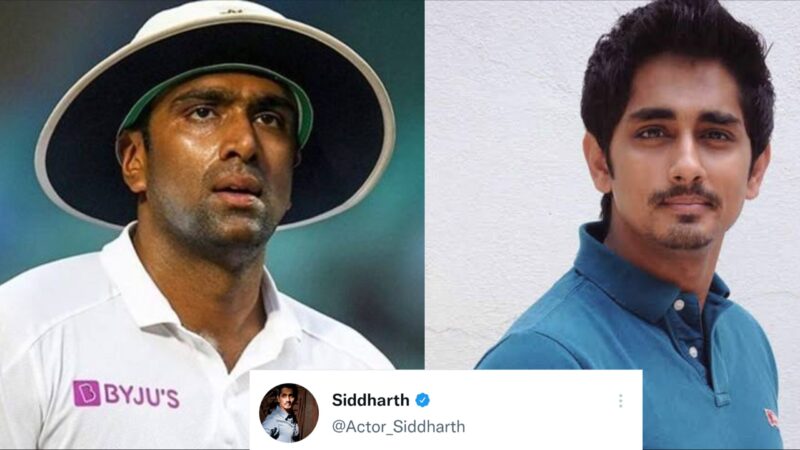 Famous actor Siddharth made an interesting tweet related to Ravichandran Ashwin recently. The celebrity sarcastically wrote on Twitter that the only way Ravichandran can get a place in the Indian playing XI is by becoming a captain. Siddharth asked if Team India can try the Tamil Nadu all-rounder as a captain.

In case you didn’t know, Ravichandran Ashwin has been on the bench for the last two Test matches. Even in the third Test, Ashwin did not get a place in the Indian playing XI in the ongoing ICC World Test Championship series against the England cricket team. Ashwin has been playing Test cricket for years now.

But the team management has preferred to have more fast bowlers in the playing XI, keeping the English conditions in mind. The only spin bowler present in the Indian playing XI has been Ravindra Jadeja. Actor Siddharth was unhappy after the exclusion of Ravichandran Ashwin in the playing XI once again. Here’s what he wrote on Twitter:

“Can we give Ravichandran Ashwin a game as captain? Maybe the only way he will get a game anytime soon. #Legendonthebench.”

Can we give @ashwinravi99 a game as captain? Maybe the only way he will get a game anytime soon.#LegendOnTheBench

Actor Siddharth’s tweet has received more than 9,000 likes and 700 retweets so far. It will be interesting to see if Ravichandran Ashwin gets to play in the next two Tests.

How has Ravichandran Ashwin performed in the United Kingdom?

Ashwin has a decent Test record in England and Wales. He has played seven Test matches, scalping 18 wickets at an economy rate of 2.53. Ashwin was part of the Indian playing XI that played against the New Zealand cricket team in the ICC World Test Championship Final. After that game, Ashwin played a match in county cricket and performed well.

Twitter User Had Predicted Virat’s Exact Run And Ball Knock 2 Days Ago
What Are The Earpieces That Fans In The Stadium Are Wearing In England?
To Top