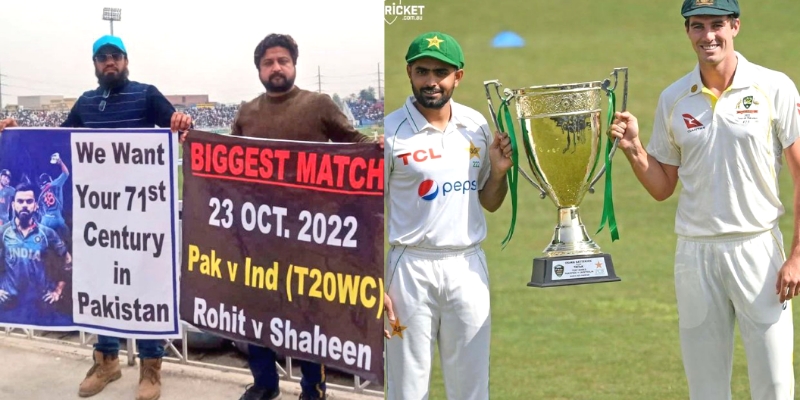 The first Test match of the three match series between Pakistan and Australia is currently being played at the Rawalpindi Cricket Stadium in Rawalpindi, which is after a gap of 24 years that these two teams are facing off each other in Pakistan.

During the match, the crazy craze of the former Team India captain Virat Kohli was seen among Pakistani cricket team’s fans. Cricket fans, including the Pakistan team fans are quite eagerly waiting for the two neighbours to take on each other in the 2022 T20 World Cup in Australia later this year.

It is really unfortunate that there is no bilateral series that being played between India and Pakistan in the current times due to the political affairs. Both the teams nowadays faces off each other in the ICC events, such as the World Cup.

The craze for the T20 World Cup 2022 is already being seen Pakistan, when there were two fans present in the stadium during the Pakistan vs Australia Test match, who had banners with Virat Kohli and Rohit Sharma’s names written on it in their hand.

Pakistan fans during the Pakistan vs Australia Test match today, "We want Virat Kohli Your 71st Century in Pakistan". pic.twitter.com/Ojj8A8kOOr

Cricket fans around the world are eagerly waiting for Virat’s 71st international century. At the same time, it was also written on the banner that the 23rd October 2022 T20 World Cup match between India vs Pakistan will be biggest match, bottom lined with Rohit vs Shaheen.

Talking about the Pakistan vs Australia Test match, Pakistan had put 476 runs on the board, thanks to a brilliant knock of 185 runs from Azhar Ali. He got a good company of Imam-ul-Haq, who also scored 157 runs.