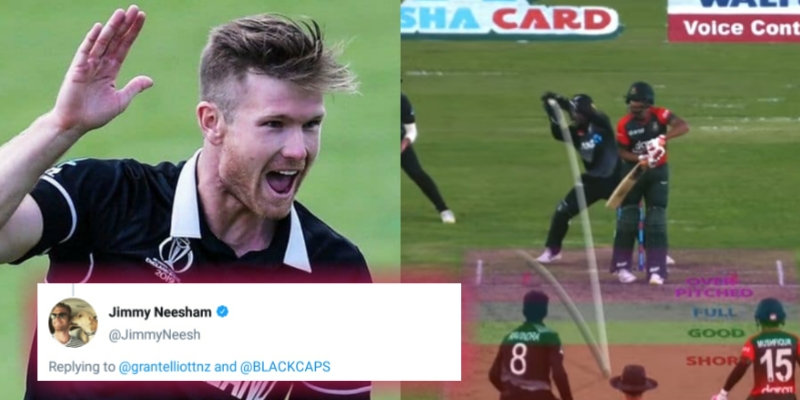 Jimmy Neesham has been very active on the micro-blogging platform, Twitter. The Kiwi all-rounder has regularly shared his views on the game with his tweets. Also, he has done it in a funny way on occasions, which has helped him a lot of fan following on Twitter as well.

The first T20I of the New Zealand vs Bangladesh series happened yesterday at the Shere Bangla National Stadium in Mirpur, Dhaka. Recently, Bangladesh hosted a T20I series against Australia and registered a 4-1 victory. The Tigers had never defeated the New Zealand cricket team before in the shortest format of the game. But yesterday they managed to do so.

Not only did Bangladesh defeat the New Zealand cricket team but they also bowled them out for their joint-lowest T20I total of 60 runs. In the second innings, Bangladesh chased the 61-run target in 15 overs, with seven wickets in hand. However, there was one delivery bowled during the Bangladeshi innings that caught everyone’s attention.

Former all-rounder of the New Zealand cricket team Grant Elliott posted a clip of the first ball that faced Mahmudullah faced. Rachin Ravindra bowled that unplayable ball. Elliott captioned it as follows and then received an interesting reply from Jimmy Neesham.

“Never easy in Bangladesh! Watching the BLACKCAPS batters struggling in foreign conditions. How’s this for a delivery though?” Grant Elliott on Twitter. “But the commentator said it’s a good pitch,” Jimmy replied to him.

But the commentator said it’s a good pitch 🤔