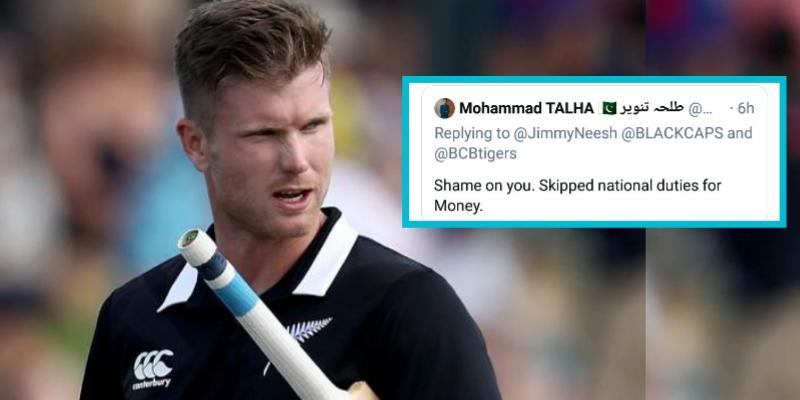 As social media has come closer to us, we have also got the opportunity to interact with our favourite stars more frequently. Sadly, for Jimmy Neesham this has turned into a hellish nightmare with Pakistani fans spewing rage against him.

Neesham has recently divulged that he cannot be a part of the imminent tour of Pakistan due to the Player Welfare Policy of the Kiwi cricketing body.

It is after a staggering 18 years that New Zealand will be stepping foot in Pakistan without the likes of their star all-rounder, Jimmy Neesham.

He has drawn severe flak from a lot of Pakistani fans as they will not be able to savour his performances. However, the Pakistani fans were livid because Neesham will be a part of the IPL which is slated to happen during the same time.

The Pakistani fans believe that he is not going to be a part of this tour because he has his commitment towards the extravagant IPL.

I’m getting a lot of messages like this so I want to be crystal clear.

It is an NZ Cricket player welfare policy that first choice players aren’t on this tour. I made a request for an exemption but that request was denied. https://t.co/m3CglBWFYF

Another fan tried to dig a little deeper and prodded Neesham by saying, “So skipped the tour due to bio bubble fatigue and chose to play IPL living in another bio bubble instead of having some much needed rest.” Neesham was not going to back down and gave a befitting response.

It’s not about some players being more important than others, it’s that no individual player will be in a bio bubble for the full three month tour. Some players will start the tour then go home halfway, others will join halfway and stay until the end.

Neesham has already landed in the UAE to be a part of the Mumbai Indians squad and will play a pivotal role in helping the defending champions fight back stronger.

New Zealand left out a few first choice players for the Pakistan and the Bangladesh tours as they wanted to give them some rest.

Despite seeking an opportunity to be a part of the Asian tours, Neesham was excluded from the squad. He will now have to watch his team take on two Asian stalwarts in Bangladesh and Pakistan.

New Zealand’s tour of Bangladesh has started today with a T20I clash between the two teams.