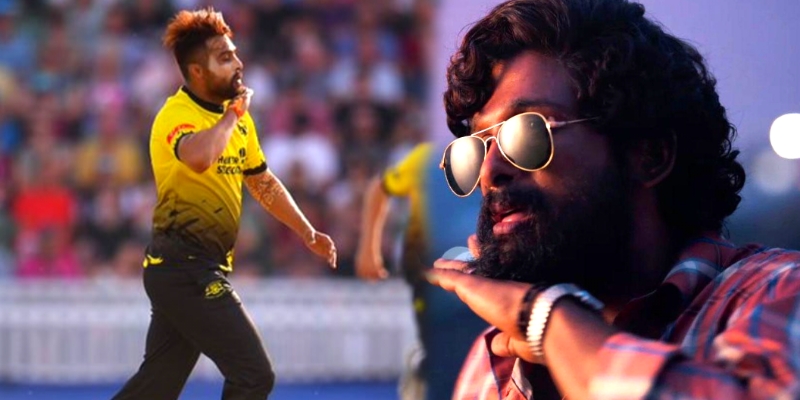 It has been 6 months since the release of the Blockbuster superhit movie Pushpa released in Theatre, but even after that long a period, the fans are still not over it, especially the cricketers and most recently, Pakistan’s Mohammad Amir became the latest to join the trend.

Indian South industry movie Pushpa: The Rise was a such a hit movie that it broke many records, especially its dance scene involving the mega star Allu Arjun. The scene became quite so popular that cricketers around the world started to replicate after achieving something during a match.

Players like Dwayne Bravo, Ravindra Jadeja among many to have been captured replicating the dance move. And now, former Pakistan pacer Mohammad Amir is the very latest to join the trend.

Amir featured for the English T20 Blast side Gloucestershire as countrymen Mohammad Naseem’s replacement for the team. He took the field on Friday for the first match for them against Somerset.

Amir bowled a peach of a delivery to the Somerset opener, who had absolutely no answer to that ball and nicked and was taken on slip by Benny Howell. After that, Amir ran towards his teammate and intimated the Pushpa movie while running towards his mates. The video of the whole was shared by Gloucestershire on their social media handle.

As for the match, batting first, Somerset posted a total of 184 runs on the board with fifties from Rilley Rossouw and Lewis Gregory, while Amir took 2 wickets for 25 runs in his 4 overs.

Chasing the target, Gloucestershire fell short by 7 runs as Australian pacer Peter Siddle took 3 wickets for 30 runs. Ryan Higgings and Benny Howell were the top scorers for Gloucestershire in the match.