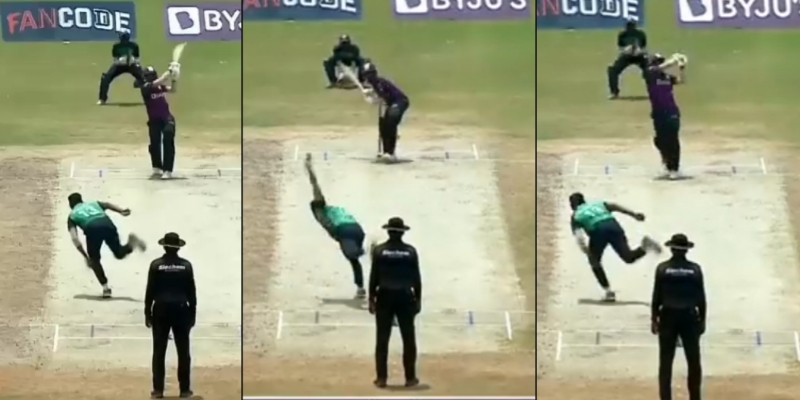 Krishna Pandey has scripted a big record to his name in the ongoing Puducherry T10 League by hitting 6 sixes in 6 balls. Let us tell you, Krishna achieved this record in the match played between The Royals and The Patriots.

Earlier this record was achieved by Yuvraj Singh in the T20 World Cup 2007, while Kieron Pollard recently achieved this feat against Sri Lanka. This is the first time in T10 cricket that a batsman has hit 6 sixes in 6 balls.

Talking about the match, Royals won the toss and decided to bat first. The match was being played at Seechem Ground of Puducherry Cricket Association. The Royals scored 157 runs in 10 overs for the loss of three wickets. Opener R. Raghupati scored an unbeaten 84 in 30 balls, while Priyam Ashish and Santosh Kumaran also played valuable innings. On behalf of the Patriots S. Parameswaran took 2 wickets for 25 runs.

In reply, Patriots lost their three wickets in 5 overs. When it seemed that now the Royals would easily win the match, then Krishna Pandey single-handedly made 83 runs in 19 balls at a strike rate of 436.80, making the match exciting. He hit 12 sixes and 2 fours in his innings. However, his innings did not work for the team and the Patriots lost the match by 4 runs.

Krishna Pandey hit many high-rise sixes in his innings. He achieved this feat on the balls of Nitesh Thakur. As soon as Krishna hit a six on the last ball of the over, the whole ground reverberated with the sound of applause. Everyone expected that Krishna would take his team to victory with his quick innings, but he failed to do so due to lack of support from any other batsman from the other end.

He has done the unthinkable! #KrishnaPandey shows what's possible with his heart-stirring hits!