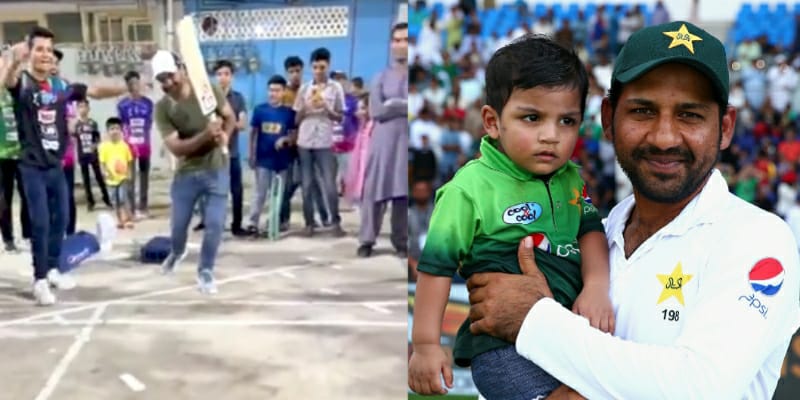 After the arrival of wicket-keeper batsman Mohammad Rizwan in the Pakistan cricket team, Sarfaraz lost his spot. He was not a member of the Pakistan side that advanced to the semi-finals of the 2021 T20 World Cup. In November 2021, Sarfaraz played his last T20 International for Pakistan against Bangladesh.

In April 2021, he played his final One-Day International (ODI) against South Africa in Centurion. In this season’s Pakistan Super League, he was the captain of the Quetta Gladiators. Sarfaraz’s team came in fifth place in the points table.

On social media, a video of former captain Sarfaraz Ahmed, who led Pakistan to the Champions Trophy in 2017, has gone viral. In the video, he can be seen playing street cricket with his son Abdullah in Pakistan. Sarfaraz was clean bowled by his son Abdullah during this time.

The father and son pair can be seen in this video surrounded by a large number of cricket fans. Abdullah bowled to his father, Sarfaraz, during this time. Abdullah smacks Sarfaraz straight on the stump with a ball. After getting bowled, the former Pakistan captain smiles.

Sarfaraz also said in an interview that his son is fond of playing cricket but doesn’t want him to become a cricketer. He said as a cricketer I have suffered for many things in my life and I don’t want my son to suffer the same. If he wants to play cricket then I want him to be selected soon for the national team.