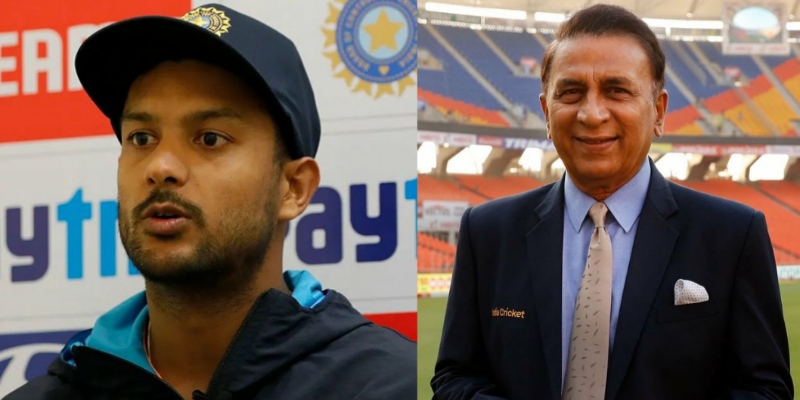 The Indian cricket team is playing the New Zealand cricket team in the 2nd of the 2 match Test series at the Wankhede Stadium in Mumbai. The match is a series decider after the 1st match ended in a draw.

The match began late than the scheduled time as the 1st session of play was completely washed out due to wet outfield. The toss happened at 11:30 AM and the match began at 12 PM.

Mayank Agarwal stood solid at the other end, forming partnership with, first Shreyas Iyer and then Wriddhiman Saha. And just before the end of the Day 1’s play, the Karnataka cricketer completed his century.

Mayank Agarwal on advice he received from Sunil Gavaskar

While speaking after the day’s play, Mayank Agarwal revealed the advice he received from Indian cricket legend Sunil Gavaskar.

Mayank Agarwal stated that Sunil Gavaskar had told him to keep the bat low at the start of his inning. Agarwal has a tendency to keep his bat high, which has led to his wickets very easily.

He further added that he could not make the adjustment in the short period but saw Sunil Gavaskar during the team huddle and noticed his shoulder position and thought that he needs to be more side on.

Mayank Agarwal was having a rough patch on his run as Indian team’s opening batsman as the Karnataka player had failed go score runs in the past couple of games.

He was likely to be dropped for the match, but the plan was changed at the last moment as Ajinkya Rahane, Ravindra Jadeja and Ishant Sharma was ruled out due to injury, meaning that Mayank kept his slot.

The prolific opening batsman ended the Day 1’s play with 120 runs off 246 balls, with Wriddhiman Saha alongside him with 25 runs. India ended the Day’s play with 221 runs for the loss of 4 wickets.