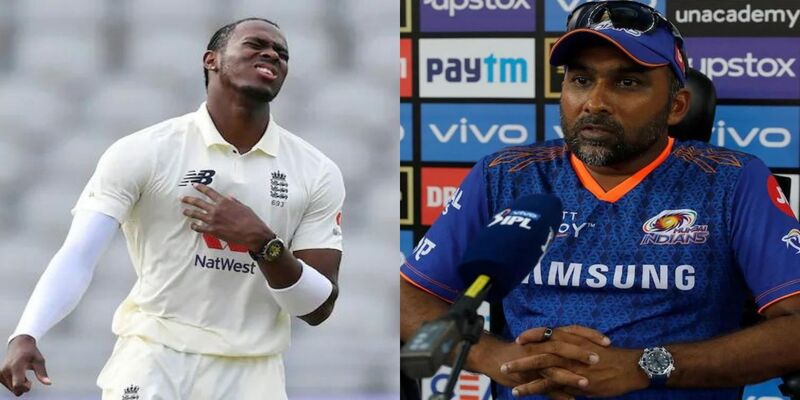 England premier fast bowler, Jofra Archer has suffered another injury during his rehab process. It has ruled him out of the entire coming summer season. He has sustained a stress fracture in his lower back this time. The recent injury comes after he underwent two surgeries for his elbow. His previous elbow injury kept him out of cricket for more than a year.

He hasn’t played any international games for over 12–13 months. Archer also missed the 2021–2022 IPL season because of that. Despite that, Mumbai Indians went for the English speedster at the auction, that too for a whopping amount of INR 8 crore in the hope that he might play in the 2023 season.

However, there is still plenty of time in the IPL 2023 from now. But after another injury to him, it might create doubts in the minds of the Mumbai Indians and the management. However, MI head coach Mahela Jayawardene feels that the 2023 season is “too far ahead.”

During an interaction with India Today, Jayawardene reckons that the next season is far away, but the MI experts will watch him closely for his fitness along with the ECB. He added, “It is a new injury and not an old one, so hopefully, recovery should be quicker for him. We’ll see how he progresses from this injury.”

The MI experts and officials from England and Wales Cricket Board (ECB) are keeping an close eye on Archer. MI signed the English pacer after engaging in a bidding war with Sunrisers Hyderabad and Rajasthan Royals at the mega-auction. In the 2020 edition of the Indian Premier League, Jofra Archer was named “Most Valuable Player of the Season.”

However, there is no further update regarding the comeback of the pacer. Meanwhile, it has been learnt that he will not participate in any games this summer. England will host New Zealand for a three-match red-ball series starting on June 2.