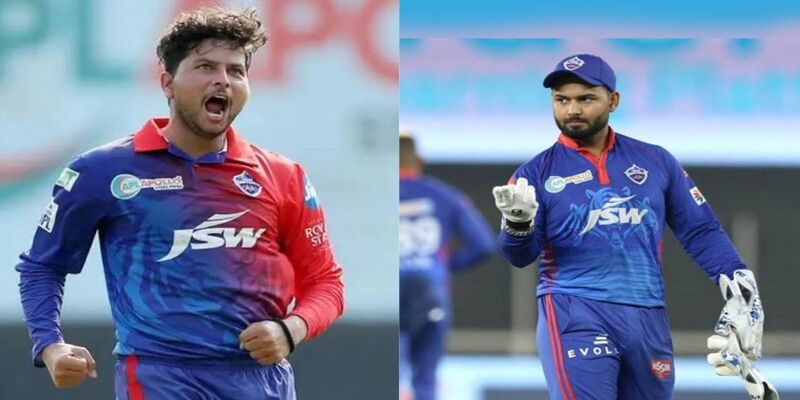 On Wednesday, Delhi Capitals had a thumping win over Punjab Kings at Brabourne Stadium. DC won the match by nine wickets with 57 balls to spare. And it was the spin attack of the Capitals that did the damage to the Punjab Kings. DC spinners took a total of six wickets in ten overs, giving away just 45 runs. Veteran spinner Kuldeep Yadav was adjudged “Man of the Match” for his performance of 2/24 in the match. It has been an incredible season so far for the 27-year-old, coming out of the tough phase.

It’s been a complete turnaround in his career after joining the capital-based franchise. The 27-year-old has taken 13 wickets in six matches and is the second-highest wicket-taker this season. His performance graph has moved upwards as he has received all three “Man of the Match” awards in all three wins for DC. Last night, at the post-match presentation, Kuldeep gave credit to his DC skipper for his success this season.

He also revealed how he took both wickets in the match, giving credit to Pant for one of those wickets. He said that the skipper was asking him to bowl from around the wicket, which he was not much interested in. However, it ended up getting him the wicket of Nathan Ellis after listening to Pant to bowl from that side. He also said that the plan for Rabada was pretty simple and clear, because he never take a big stride forward.

That is why he bowled the wrong’un that turned out to be very effective against Rabada. Kuldeep also praised Pant for trusting the bowlers in every situation, whether they are going for runs as well. He said, “I have been given a lot of confidence in this IPL and I am very clear mentally as to how the batter will react to me.”

The 27-year-old concluded that he is now enjoying his game time and wants to deliver more for the team. Kuldeep lauded the DC skipper, saying that he is giving his bowlers the confidence that is the huge point in the match. Rishabh Pant and his team will now lock horns against the Rajasthan Royals on Friday. Notably, that game has also shifted to Mumbai amid any COVID-19 possibilities.