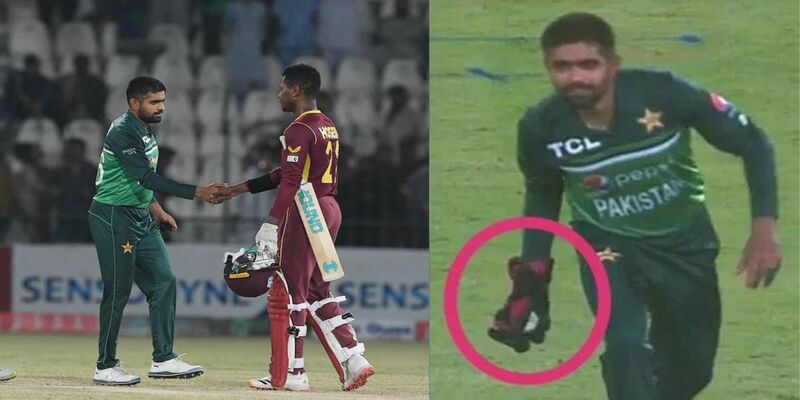 Pakistan won the second ODI match against the West Indies comprehensively by 120 runs. And it was none other than the Pakistan skipper, Babar Azam, who anchored the batting line-up with yet another significant contribution. Babar scored his 19th half-century and missed his fourth successive century when he was dismissed for 77 runs.

However, he made another big record, which no one had ever achieved till now in ODI cricket. Babar scored his ninth consecutive score of over 50 in international cricket across the format. Having scored 103 in the first innings, he carried on his form. However, there was a bizarre incident that took place on the cricket field.

The home team was penalized with five runs by the on-field umpires. It happened in the 29th over of the chase. The Pakistani skipper wore the wicket-keeper glove and caught the ball behind the stumps. The umpire ruled that Babar’s act was illegal, and thus, five runs were added to the total for the visitors.

Here’s why Pakistan was penalized with five runs

As the law book says in cricket, according to 28.1 Protective equipment– “Apart from the wicket-keeper, none of the other fielders is allowed to wear any kind of gloves or external leg guards. On the other hand, if a fielder needs to wear anything to protect his hand, it should be with the permission of the umpires only. “

28.1 – No fielder other than the wicket-keeper shall be permitted to wear gloves or external leg guards. #PakvWI pic.twitter.com/WPWf1QeZcP

That was the reason that the umpire penalised the home team. But speaking of the result, it didn’t affect Pakistan in any way. Because they thrashed the visitors by a huge margin of 120 runs. The Pakistani spinners were all over the West Indian batsmen. In particular, Mohammad Nawaz, who registered his career-best figure of 4/19 in ten overs.

Mohammad Wasim Jr took three, and Shadab Khan took two wickets. The visiting team was bowled out for 155 runs. The Men in Green have taken a 2-0 unassailable lead with one match to play. The third and final ODI will be played on Sunday, June 12 at the Multan Cricket Stadium, Multan.