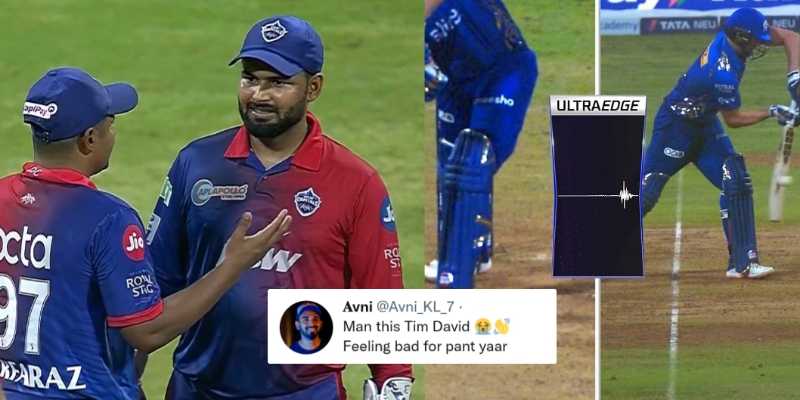 The match was played between Mumbai Indians and Delhi Capitals, but in the end, the winner is Royal Challengers Bangalore. MI won their final league match of the season, denying DC victory. And with this loss, DC has been eliminated from the race for the playoffs and RCB has qualified for the top four of the tournament.

However, it was mainly some tactical errors from DC skipper Rishabh Pant that cost them the match. Delhi had the match under their control within the 15 overs, but once Tim David came to the crease, the whole scenario changed in favour of the Mumbai Indians.

David played a destructive cameo of 34 runs off just 11 balls, including two fours and four maximums, to help MI chase down the target. But the first ball he played from Shardul Thakur, he was out, but Pant didn’t go upstairs. It happened on the fourth ball of the fifteenth over. David played his first ball and he got a faint knick and Pant caught the ball.

However, both the keeper and bowler appealed for it, but it was turned down by the on-field umpire. All the DC players gathered but didn’t go upstairs to the third umpire, despite having two referrals. In the end, it was shown on the big screen that the ball caught the edge and that was the match-turning moment because after that, the game slipped from the hands of Delhi.