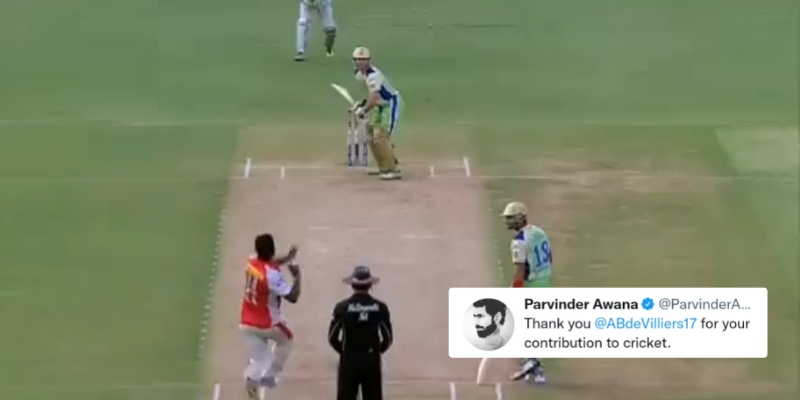 Former South African men’s cricket team skipper AB de Villiers decided to end his cricketing career earlier today. He announced his decision to hang up his boots via social media posts. The South African star quit international cricket back in 2018, but he continued to play in the T20 leagues globally. Most notably, he was an important player for the Royal Challengers Bangalore in the IPL. Parvinder Awana posted an old IPL video after he retired.

After retiring from the IPL, AB de Villiers thanked the support staff, coaches, Virat Kohli and fans for their support. He also mentioned that he will continue to be a RCBian always even after retiring from the sport. “RCB will always be very close to me and my family and will continue to support this amazing team. I am a RCBian forever,” AB de Villiers said.

AB de Villiers played many memorable knocks for the Royal Challengers Bangalore. The RCB franchise wore a green kit once every season to support the Go Green movement. And in the 2016 green jersey match, de Villiers scored a century against the Gujarat Lions, a knock that no cricket fan can ever forget.

In IPL 2013, Royal Challengers Bangalore hosted the Punjab Kings at the M. Chinnaswamy Stadium. The home team wore the green kit. Adam Gilchrist won the toss and invited RCB to bat first. Half-centuries from Virat Kohli and Chris Gayle gave RCB a brilliant start. AB de Villiers came out to bat in the penultimate over of the innings, and he hit a six on the first ball that he faced. On the second ball, Parvinder Awana rattled his stumps.

Soon after de Villiers announced his retirement, Awana posted that video and wrote: “Thank you @ABdeVilliers17 for your contribution to cricket.”