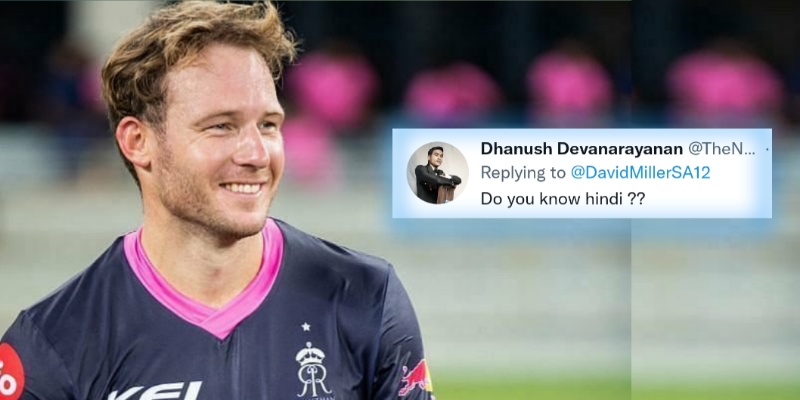 The social media game of players is stepping up each day as the countdown for IPL is reaching an end. The second phase of IPL 2021 will start on September 19th with the high-octane clash between Chennai Super Kings and Mumbai Indians. In this article, we take a look as David Miller gives a hilarious response to a fan who asks him if he knew Hindi.

Rajasthan Royals Admin one of the funniest in the league

The admin of Rajasthan Royals is one of the funniest in the league. This has helped the franchise occupy a strong position when it comes to the IPL franchises on social media platforms. The memes shared on the RR page and the self-deprecating humour at times is fun to watch. It seems now the bug has bit the players too.

While the performance off the field is good, RR needs to step up on the field. The franchise is currently in the bottom half of the table and needs an inspired performance to reach the playoffs of IPL 2021. However, at the moment, it is looking hard because the team is without some of its important players like Jos Buttler and Ben Stokes. Yet, there are expectations from the franchise because they have managed to sign a few good replacements.

David Miller, who is often known to be a quiet personality, has recently opened up on social media. He is actively engaging himself in a few banters on Twitter. The South African recently gave a hilarious fan who asked him if he knew Hindi. It all started when Dishant Yagnik posted a question saying, “Anyone wants to see RR Admin?”. Miller replied with a pic and the dialogue “Bas Kijiye Bahut Ho Gaya”.

While this itself was funny, a fan then asked if he understood Hindi. To this, Miller brought out another picture with the dialogue “Ittu Sa” which means “a little”. This again drove many into a wave of laughter.

Miller got to play a few games in the first phase of IPL 2021. He is likely to get a few more opportunities in UAE. It is important for RR that he remains in good form.