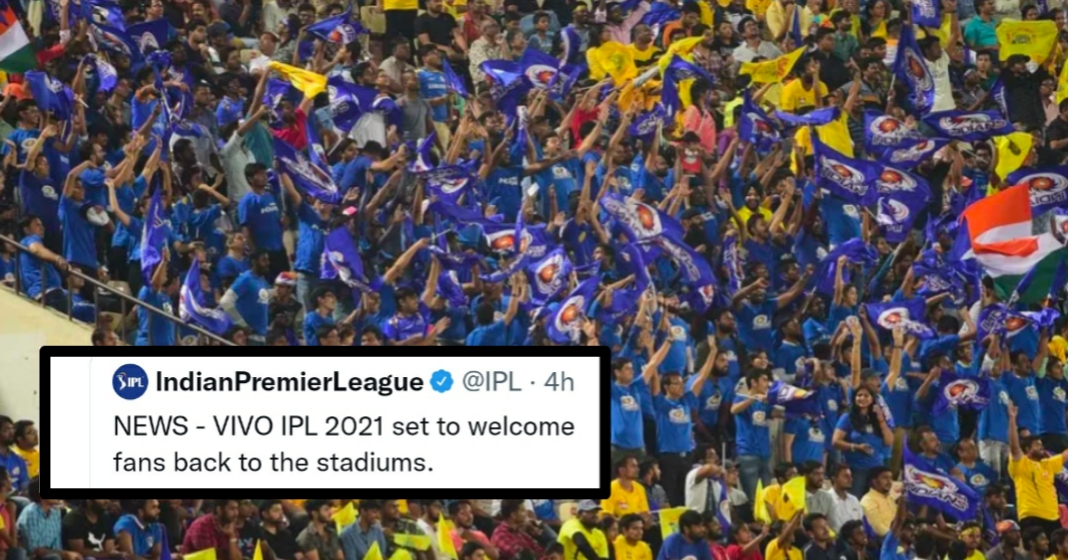 IPL 2021 will resume from September 19th in UAE. Mumbai Indians and Chennai Super Kings will clash in the first game of the second phase of IPL 2021. In this article, we take a look at the hilarious reply by Rajasthan Royals to a post welcoming fans back to the stadium in IPL 2021.

It has been a while since fans were present in the stadium in IPL. However, IPL has now announced that fans would be allowed to attend the games in the UAE leg of IPL 2021. Announcing the same, the official statement read, “This match will be a momentous occasion as IPL will welcome the fans back to the stadiums after a brief hiatus owing to the Covid-19 situation.”

However, as expected, there would be a cap on the number of viewers allowed to attend the games. The official statement, though, did not talk about the exact seating capacity. It said, “Matches will be played at Dubai, Sharjah and Abu Dhabi with limited seating available keeping in mind the Covid protocols and UAE government regulations.”

Rajasthan Royals has a humorous reply

The social media admin of Rajasthan Royals is known to post hilarious posts across all the platforms. The self-deprecating humour and the witty and sarcastic posts have all combined to give huge popularity for the RR admin. IPL recently put out a post announcing fans back to the stadium. RR had a hilarious reply to it.

To provide context, the photo used by RR is of Jaya Bachchan from the film Kabhi Khushi Kabhie Gham. While the scene has an emotional setting, various users have looked at the funnier side of it and have made many memes. RR admin, too, followed suit. Meanwhile, Rajasthan is currently sitting at No.5 on the points table. They, so far, have three wins from four games. Sanju Samson and co. could push for a playoff spot with a few wins in UAE.