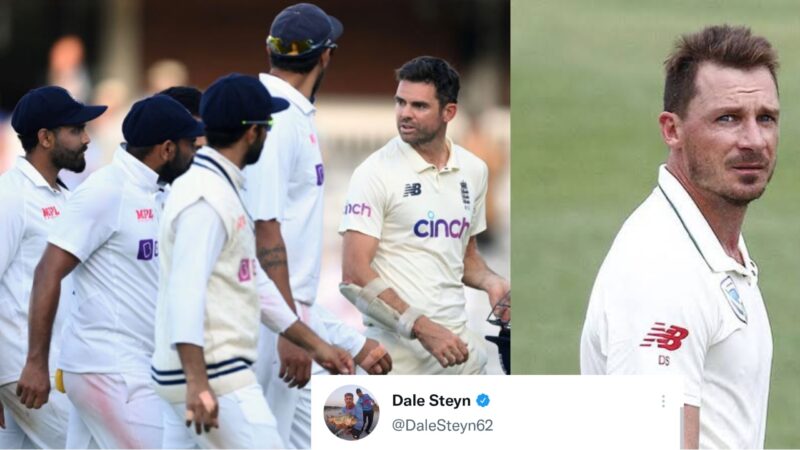 The second Test of the India vs England Test series is currently underway at the historic Lord’s cricket ground. Yesterday, India bowled England out for 391 runs, with the home side taking a small lead of 27 runs. An interesting thing happened during the first innings of the England cricket team at the Lord’s cricket ground. Even South African pacer Dale Steyn could not stop himself from reacting to that incident.

Indian fast bowler Jasprit Bumrah had earlier dismissed James Anderson in this series with a yorker. However, in the Lord’s Test, Bumrah bowled a few bouncers to the tail-ender Anderson. Many fans enjoyed this battle, while a few English fans were worried if Bumrah was attempting to hurt Anderson. South African pace bowler Dale Steyn posted a tweet, reacting to that incident on his official Twitter profile.

Dale Steyn believed Anderson would not leave Bumrah when he comes out to bat later in the series. However, a few fans trolled Steyn and Anderson, saying that Bumrah was a better batter than Anderson. Also, they pointed out that Anderson was not so quick as Bumrah these days. Hence, the bouncers were unlikely to trouble Bumrah much. Here’s what Steyn tweeted:

Will the prediction of Dale Steyn prove right?

India is currently trailing England by 27 runs in the first innings. It is likely that Jasprit Bumrah will get an opportunity to bat in the second innings unless there are some big partnerships from the top-order of the Indian lineup.

James Anderson will prefer bowling to Jasprit Bumrah as well and try to avenge. Hence, the prediction made by South Africa cricket team fast bowler Dale Steyn is likely going to prove right.