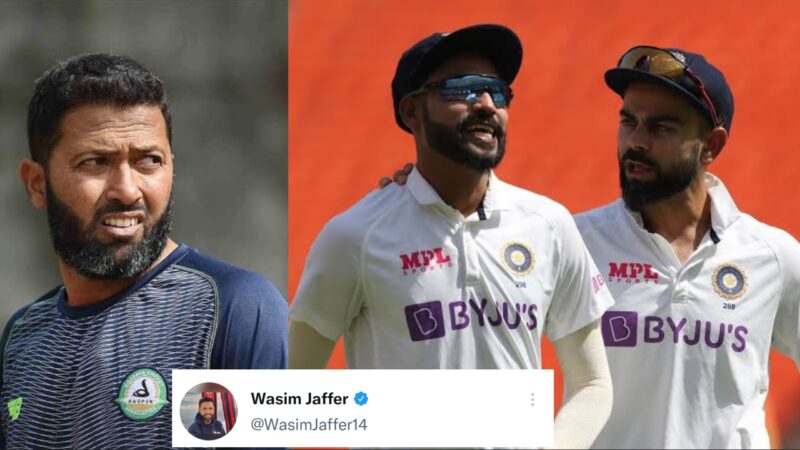 Former India cricketer turned coach Wasim Jaffer has given a new name to DRS and took a slight dig at the Indian team after they wasted two reviews in the second Test at Lord’s against England. However, during the second day of the second Test, India captain Virat Kohli failed to take a couple of reviews.

It started with the last delivery of the 21st over when Team India pacer Mohammed Siraj bowled an incoming delivery to the England captain Joe Root that hit him on his pads. After the umpire decided not out, Siraj forced Kohli to challenge the decision, which eventually went in the batsman’s favor.

Meanwhile, on the fourth delivery of Siraj’s next over, he once again bowled a similar delivery to Root. While Siraj wasn’t too excited about the review, Virat Kohli asked for the review with just a second remaining to call for it.

Seeing how Rishabh Pant was asking not to take the review, it was clear to everyone, and replays also confirmed that the ball would have missed the stumps, and again, the decision went to Root only. And, after that, Virat Kohli returned to the slips for fielding after wasting two reviews as well.

Seeing this, Wasim Jaffer renamed DRS “DRS: Don’t Review Siraj 😛 #ENGvIND.” He took to Twitter and shared this as well.

Team India has put up 364 runs in the first innings, having finished Day 1 on 276/3. India opener KL Rahul scored a brilliant 129 along with Ravindra Jadeja’s 40. Former Pakistan captain Inzamam-ul-Haq has applauded India’s swashbuckling opener, Rohit Sharma, for his batting on Day 1 in the second Test against England. Sharma scored 83 and helped his side to provide a steady start.

While speaking on his YouTube channel, he said: “India had already signaled their intention with their performance in the first Test. Fast bowlers get a lot of help in England for the first two hours due to the moisture. They (England) hoped for 3-4 early wickets to put India under pressure.”