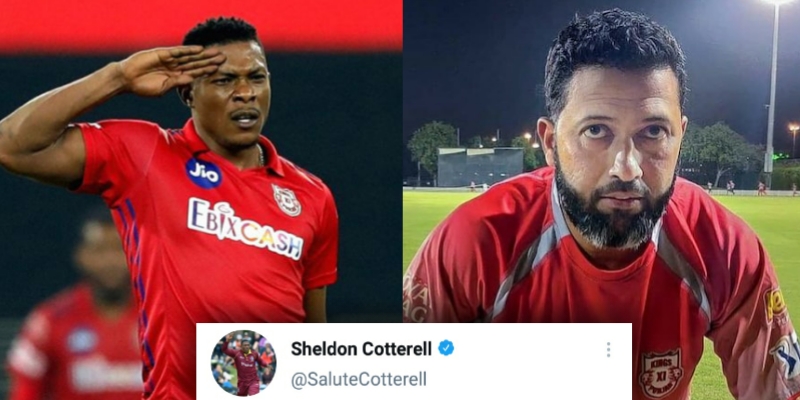 Sheldon Cottrell has become a very popular cricketer. He is a left-arm fast bowler, and after taking a wicket in any match, Cottrell celebrates with a Salute. His celebration is liked by many fans. Last year, Sheldon played for the Punjab Kings in the 2020 edition of the Indian Premier League.

During that season, Punjab included Sheldon in their playing XI for a match against the Rajasthan Royals at the Sharjah Cricket Stadium. The left-arm fast bowler got the responsibility of bowling one of the slog overs. It seemed like Punjab Kings would win the game, but Rajasthan’s all-rounder Rahul Tewatia turned the match upside down by smashing five sixes in the over from Cottrell.

Now, in the 2021 edition of the Caribbean Premier League, Sheldon is playing for the St. Kitts and Nevis Patriots. In a match against the Barbados Royals, owned by the owners of the Jaipur-based franchise, Sheldon had to score four runs off the final ball in a run-chase. Sheldon surprised everyone by hitting a six and finishing things off in style for his team.

A cricket agent from Australia posted a meme related to Rahul Tewatia and Cottrell after the match. Soon after, she received a response from the Caribbean pacer in Hindi.

“Is my agent sledging me? Show me you an Aussie without telling me you an Aussie?! Arre yaar, Gabba bhool gayi kya?” Cottrell replied and tried to remind the agent of the Gabba Test defeat against the Indian cricket team.

A fan asked Cottrell if Wasim Jaffer had trained him

Seeing the West Indies pacer troll an Aussie in Hindi language, a curious fan asked him if former Indian cricketer and the batting coach of the Punjab Kings train him. Here’s how Sheldon responded: