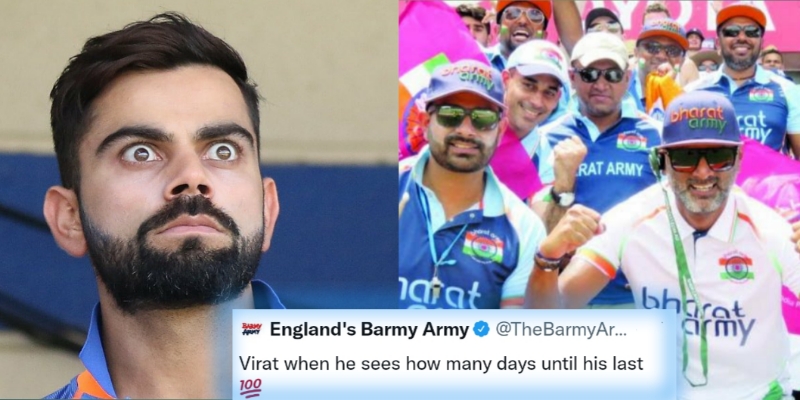 When you talk about some of the top batsman in the history of world cricket, Virat Kohli has to be on the top half of the list. However, the Indian skipper is struggling to convert his start into a big inning in the recent times, and some supporters and some supporters groups are taking this as an advantage to troll Virat Kohli.

Recently, the England Cricket Team’s supporters group, the England’s Barmy Army tried to troll Virat Kohli by sharing a photo with a caption that read, “Virat when he sees how many days until his last hundred.”

The Indian cricket team’s supporters group, The Bharat Army didn’t take this well as they gave a befitting reply to England’s Barmy Army by replying to that, “70 >>>> 39”, for those who didn’t understood, they basically reminded the England’s Barmy Army that the Indian captain Virat Kohli’s 70 centuries is better than England captain Joe Root 39 centuries.

While some fans of the Indian team also trolled the England’s supporters group for their attempt to troll Virat Kohli. Some fans also mentioned that Virat Kohli ODI century is even more than Joe Root’s 39 centuries in all format.

Both Virat Kohli and Joe Root is captaining the Indian and the England cricket team in the ongoing 5 match Test series, which is being played in England. After 3 matches already played, both the teams find themselves level in the series after the first match was washed out.

The 4th match is being played at the Kennington Oval in London. India finds themselves trailing England by 56 runs after the end of Day 2’s play. Team India could only manage to put to 191 on the board thanks to a cracker of a inning by Shardul Thakur, who scored 57 runs of 36 balls.

The England team took the lead as they finished their first inning for 290. The Indian openers have given India a solid start in the 2nd inning as India finished day 2 with 43 runs on the board without losing any wickets.