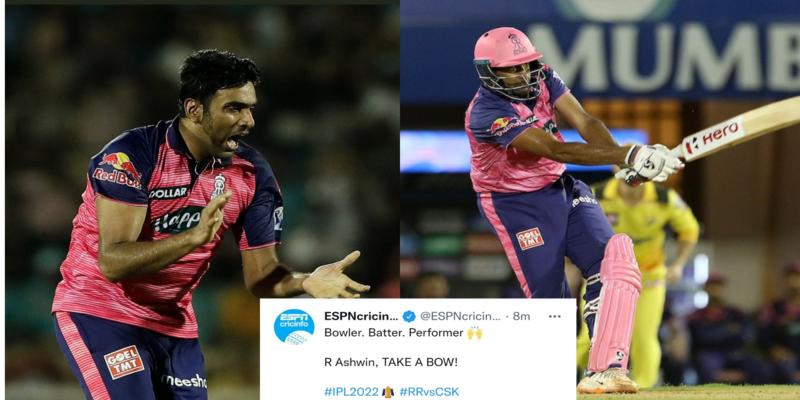 Finally, Rajasthan Royals have finished the group stage at the second spot and will now face Gujarat Titans in the first Qualifier. Sanju Samson and his team has beaten the defending champions, Chennai Super Kings, by 5 wickets at the Brabourne Stadium. And the hero of the match was none other than Chennai’s own Ravichandran Ashwin.

The RR all-rounder has shown an all-round performance to win a match against his old franchise. He delivered with the ball and, in the end, came to RR’s rescue to deliver with the bat as well. Ashwin played a brilliant cameo of 40* off 23 balls, including two fours and three maximums, to seal the deal for RR.

Earlier in the match, MS Dhoni won the toss and elected to bat first. CSK started the innings with Moeen Ali’s storm as he hit the second fastest half-century for CSK in just 19 balls. CSK scored 94 runs in the first 10 overs. But once they lost the momentum, they kept on losing wickets and ended the innings at 150/6.

Chasing the target, Buttler got out early, but Jaiswal looked solid to score yet another half-century this season. However, RR lost a few back-to-back wickets in the middle. But in the end, Riyan Parag (10*) and Ashwin won the match. The veteran off-spinner never let the CSK bowlers get over him and played some fantastic shots. After the all-round performance by Ravichandran Ashwin, Twitter was also flooded with praise from the fans.