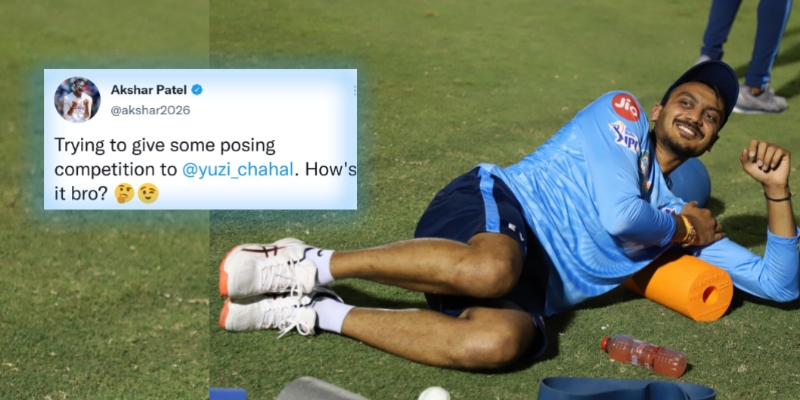 Axar Patel and Yuzvendra Chahal are currently two of top spin bowlers in Indian cricket. While Axar made a name for himself with his spectacular performances on Test debut in the home series against the England cricket team, Chahal has done well consistently in the shorter format of the game. The selection committee of the Indian cricket team raised quite a few eyebrows when they picked Axar Patel over Chahal for the ICC T20 World Cup 2021.

While the Royal Challengers Bangalore got off to a disastrous start in the United Arab Emirates leg of the 2021 edition of the Indian Premier League, the Delhi Capitals are set to play their first match tonight against the Sunrisers Hyderabad team. Before the match against the Sunrisers Hyderabad in the 2021 edition of the Indian Premier League, Axar Patel posted a photo on Twitter, where he copied a pose of Yuzvendra Chahal.

“Trying to give some posing competition to @yuzi_chahal. How’s it bro?” Axar Patel captioned the picture.

Soon after, Yuzvendra Chahal posted a tweet in the comments section of Axar Patel’s post. Chahal tried to pull Axar’s leg as he wrote:

You can see the exchange between Axar and Yuzvendra Chahal that happened on Twitter right here: