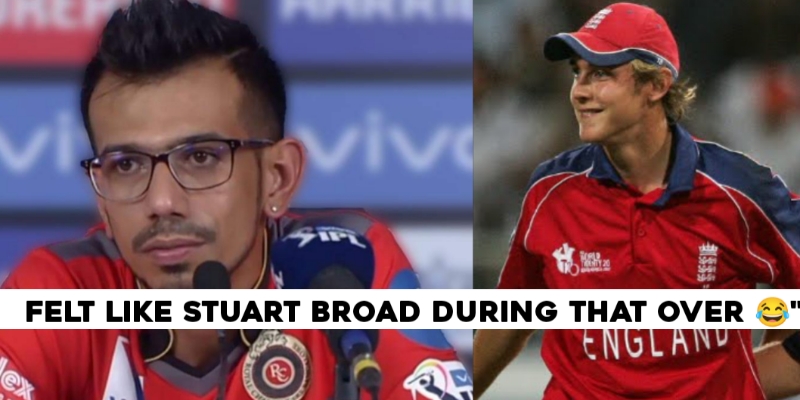 September 19th is a memorable date in the history of Indian cricket. This was the day when Yuvraj Singh struck Stuart Broad for six sixes in an over. The match happened in the inaugural edition of the T20 World Cup. In this article, we look back at a savage reply by Stuart Broad to Chahal, who commented on Yuvraj‘s six-hitting prowess.

Yuvraj Singh is one of the best six-hitters that Indian cricket has seen. He always had a wide arc, and Yuvi’s bat swing made sure that sixes were never short when he was at the crease. The best exhibition of the same was in the 2007 T20 World Cup.

In the game against England, Yuvi took Stuart Broad for six sixes in a single over and therefore, broke plenty of records. It also gave India the momentum that it needed to go on and win the World Cup.

In 2019, Yuvraj Singh started playing for Mumbai Indians. Yuvi’s form was not that great, but yet, MI backed the veteran. In the game against RCB, he showed glimpses of his old self. Especially against Yuzvendra Chahal, Yuvi hit three consecutive sixes and put the leggie under pressure. Chahal, though, responded well by taking his wicket immediately.

In the post-match conference, Yuzi conceded that he felt like Stuart Broad when Yuvi was hitting those sixes.

3 sixes in 3 balls bowling to @YUVSTRONG12 and even @yuzi_chahal feared a repeat of the 2007 T20 WC, before redeeming himself the very next delivery 😎 #RCBvMI #VIVOIPL @RCBTweets pic.twitter.com/RRqxxmrDZw

Stuart Broad had a savage reply to Chahal’s supposed troll at him.

The English pacer is usually active on social media and was quick to give it back on this occasion. He said, “Hope he feels like me in 10 years time with 437 Test wickets.”

When Guptill responded to a fan who said he avoided tour due to IPL
Sister Malti reacts to Deepak Chahar’s fantastic performance vs. MI
To Top