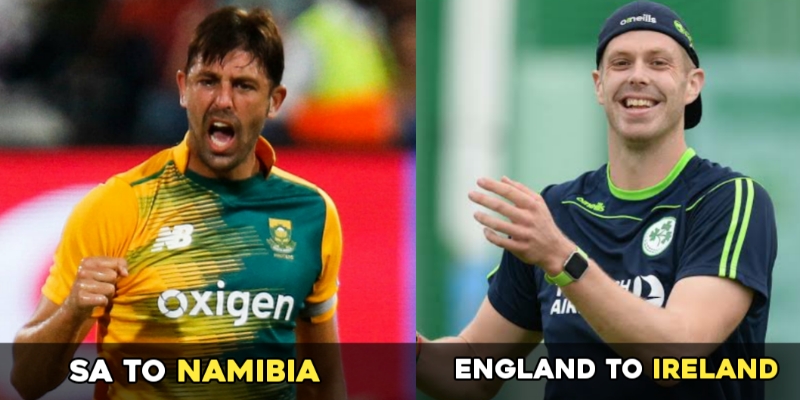 Cricketers across the world have earned everyone’s attention with their top-quality performances on the field. Earlier, only a few nations played cricket. However, now the other countries have also started playing international cricket. Currently, there are 82 teams in the official ICC T20I Team Rankings.

So, it shows how much the sport has grown. The competition to earn a place in the playing XI of a top-tier team has increased so much that some cricketers even decide to move to another country. In this listicle today, we will look at seven such cricketers.

1. One of the top cricketers of South Africa Juan Theron

Right-arm fast bowler Juan Theron was one of the top white-ball bowlers in South Africa once upon a time. He even earned contracts from franchises in the Indian Premier League.

2. One of the top cricketers of South Africa David Wiese will play for Namibia in ICC T20 World Cup 2021

David Wiese is a pace-bowling all-rounder who played for South Africa in the 2016 edition of the ICC T20 World Cup. He even played for the Royal Challengers Bangalore in the IPL.

Soon, he retired from South African cricket and signed a Kolpak deal. Now, he is all set to return to international arena as a Namibian player.

Another South African all-rounder to appear on this list is Roelof van der Merwe. The spin-bowling all-rounder was also a part of the Royal Challengers Bangalore squad once upon a time. He even represented the Delhi Daredevils in the IPL.

Roelof van der Merwe has now switched to the Netherlands. While South Africa were once the World No.1 Test team, the Netherlands do not have Test status as of now.

Boyd Rankin switched teams twice in his career. Like Eoin Morgan, he started his journey with Ireland first and then played for the England team. However, after some time, he came back to Ireland.

Rankin is a right-arm fast bowler. He has not played for any IPL team. He retired from all forms of international cricket on May 21, 2021.

5. One of the top Irish cricketers Ed Joyce

Ed Joyce is another cricketer who went from England to Ireland. Many fans would remember that Joyce once opened the innings for England in his career.

However, later, he switched to Ireland. Joyce is a left-handed batsman. Like Boyd Rankin, Joyce could not earn a contract in the Indian Premier League.

Xavier Marshall came into the headlines after he played an incredible knock of 157 runs for West Indies. However, that was his only significant contribution to the West Indies cricket team.

Later in his year, Marshall switched to the United States of America. He even played a few international matches for the American cricket team.

Izatullah Dawlatzai was a part of the Afghanistan squad in the ICC T20 World Cup 2012. He even featured in the playing XI for the match against England.