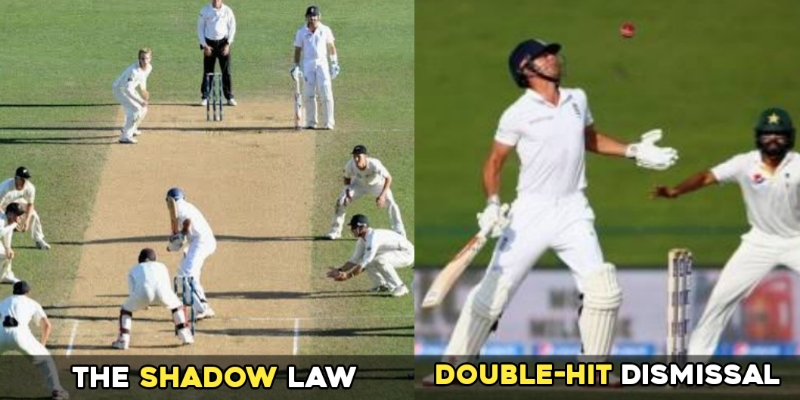 Cricket is a sport that has got immense popularity and also has a long history. Although for the people who are new to the game, the rules may appear complex, for the fanatics, the sport is pretty simple. In this article, we take a look at five lesser-known cricket laws for the fans of the game.

There are plenty of aspects that can be complicated in the game of cricket. Rules such as the powerplay, change of ball and moreover, the differences of the three formats have all added confusion at times. All that aside, here is a look at some laws that are not very popular.

As per the shadow law in cricket, if the body of a fielder around a batsman casts a shadow on the pitch, this shadow must not move until the batsman has played at the ball. Essentially, this means that the fielder must remain at the exact posture until the ball reaches the batsman. This is interesting considering not many would have thought of this aspect. Hence, this rule is one of the lesser-known cricket laws for the fans of the game.

As per law 34.1, ” The striker is out Hit the ball twice if, while the ball is in play, it strikes any part of his/her person or is struck by his/her bat and, before the ball has been touched by a fielder, the striker wilfully strikes it again with his/her bat or person, other than a hand not holding the bat, except for the sole purpose of guarding his/her wicket.” We have seen many times that a batsman handles the ball after he has touched it once. However, this could end up as a ‘Double Hit’ dismissal if the opposition is not in agreement.

3) Fielding with a cloth/cap/any other object

There are also plenty of lesser-known cricket laws concerning the fielding aspect of the game. In one such law, it is said that a player must not field a ball with any other object such as an extra piece of cloth or even his cap. Since almost no fielder does this, everyone is of the assumption that is being done to uphold the spirit of the game. However, in reality, it is a strict rule, and hence, it is being followed promptly by the cricketers.

Very few would have heard about the long-stop fielding position in cricket. It is a law that allows teams to place a fielder directly behind the wicket-keeper towards the boundary. Especially in recent years, with the advent of T20 cricket, we have seen many batsmen utilize the vacant area behind the keeper to score their runs. However, no captain places a fielder in the long-stop position. This is mainly because another vacant area in the field would be exposed, which would be less risky for the batsman to target.

As per this klaw, teams can forfeit one inning of a Test match. When there is a washout and the game is heading for a draw, teams could use this option. This is because there is a better chance of a result and the team winning will get more points. Of course, this can happen only if both captains are on the same page. Especially in the current WTC era, such a rule can be helpful. Previously, it has been used only once. In 2000, Hansie Cronje and Nasser Hussain took the option.