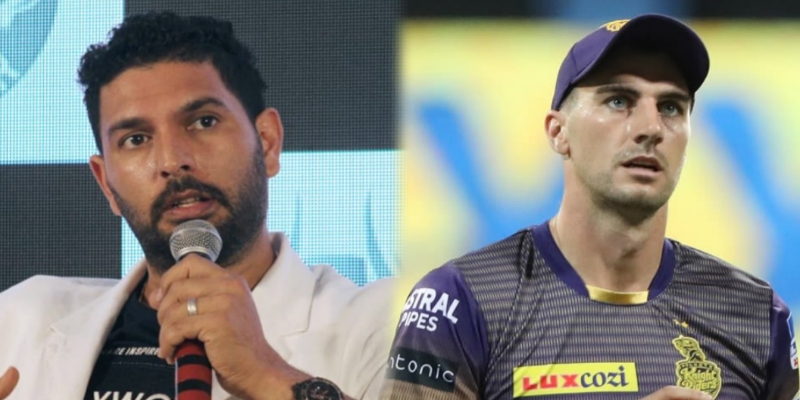 Former India batsman Yuvraj Singh was shocked by Kolkata Knight Riders’ dismissal of Pat Cummins from the Playing XI against Delhi Capitals last night. The Australian all-rounder was removed in the previous game and Tim Southee replaced him in the team, who then went on to take three wickets in the match against Gujarat Titans.

However, KKR’s batting against Delhi took a beating and none of their overseas players could do well. Finch made 3, Narine, Russell and Southee made could not even open their account. Nevertheless, on the basis of partnership of Nitish Rana and Rinku Singh, KKR’s team proved successful in scoring 146 runs.

Cummins has been excluded from the team even after he played a brilliant innings of 50 runs in 14 balls against Mumbai Indians earlier and equaled the record for the fastest half-century ever in the IPL history.

However, apart from match-winning innings with the bat, Cummins has failed to live up to his reputation with the ball and has been quite expensive. He was not getting enough wickets even in the powerplay and it put a lot of pressure on him.

However, veteran batsman Yuvraj was not convinced about not including Cummins and said that he was surprised to see the Australian on the bench. He felt that being a world-class all-rounder, Cummins would win more games for the team, even if he didn’t play a few matches.

I’m so surprised to see @patcummins30 sit out unless he’s injured ? World class all rounder . If someone has had 2 3 tough games does it mean u stop believing in your match winners? cause they can win you 3 in a row aswell !!just my opinion 🤷🏻‍♂️ #DCvKKR

Earlier, Delhi Capitals won the toss at the Wankhede Stadium and decided to bowl first. KKR made three changes to their lineup, with Baba Indrajith and Harshit Rana making their IPL debuts, while Aaron Finch came in place of Sam Billings. Shivam Mavi and Varun Chakraborty were dropped from the playing XI for KKR, while Delhi Capitals gave Chetan Sakariya a first chance this season.

As far as the match is concerned, the Delhi Capitals walked out with a win in the match. They suffered a major setback after Prithvi Shaw was dismissed for 0 in the very first ball of their inning. Then Mitchell Marsh, returning from COVID, also departed after scoring 13 runs. But, a good partnership between David Warner and Lalit Yadav ensured the win for Delhi, which basically means that KKR’s road to the playoffs is almost dead.