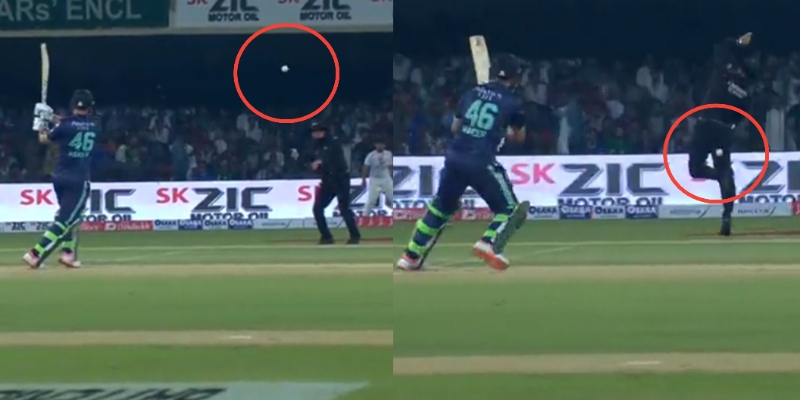 On 30th September, in the 6th T20I match between Pakistan and England, Haider Ali played a brilliant shot off a short delivery from Richard Gleeson but the ball went straight to leg umpire Aleem Dar’s way and hit on his leg.

All this happened in the sixth over of the Pakistan inning. The over was bowled by England fast bowler Richard Gleeson. On the second ball of the over, Pakistani batsman Haider Ali, while trying to hit a boundary, hit Gleeson’s short delivery for a pull shot but the ball went to the leg umpire Aleem Dar’s way and hit on his leg.

The ball was coming very fast to the leg umpire and due to this he did not understand how to avoid it. He immediately turned back after which the ball hit his thigh. After hitting the ball, Dar was seen caressing his leg for some time.

The Pakistan Cricket Board (PCB) official Twitter handle shared a video of the following incident.

Talking about the match, batting first, Pakistan scored 169 runs in 20 overs for the loss of 6 wickets. For the hosts, captain Babar Azam played a brilliant half-century of 87 runs not out in 59 balls with the help of 7 fours and 3 sixes. Apart from him, Iftikhar Ahmed scored 31 runs in 21 balls.

In reply, England won the match by 8 wickets due to Phil Salt’s innings of 88 runs not out off 41 balls. Apart from him, Alex Hales (27), David Malan (26) and Ben Duckett (26) played valuable innings. For the Pakistan team, Shadab Khan took both the wickets for 34 runs in four overs. With this win, both the teams have won 3-3 matches each in the series so far.

Now there is only one match left which will be played on 2nd October at the very same ground. Whichever team wins the match will also win the series. It is expected that Mohammad Rizwan, who did not play in the sixth T20I match, make a comeback in the team for the last match.

Watch: Suresh Raina turns back the time and takes a marvelous diving catch
Watch: India’s Yuzvendra Chahal hilariously hits his former teammate on his back during 2nd T20I vs South Africa
To Top