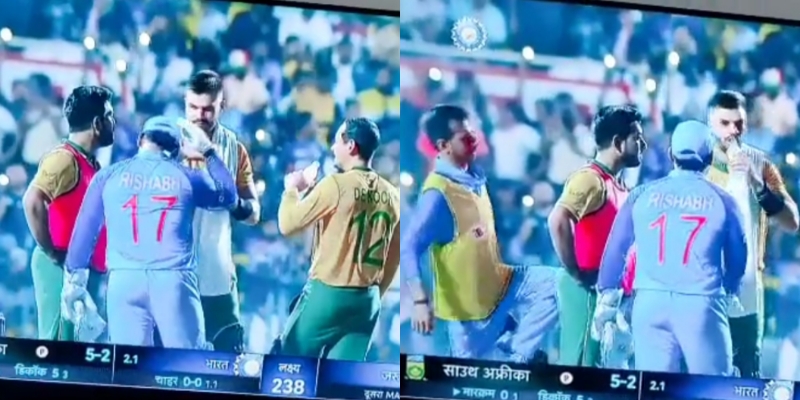 The Indian team took an unassailable 2-0 lead in the three-match T20I series by defeating South Africa by 16 runs in the second T20I in Guwahati on October 2nd. In the match played at the Barsapara Cricket Stadium, both the teams together scored 458 runs in 40 overs but in the end the Indian team won the match by 16 runs.

David Miller played a brilliant innings for the visiting team as he scored a brilliant century but failed to get his team to over the line. During the match, many funny moments were also seen between the players of both the teams. First a snake came into the ground, due to which the game was stopped for a while.

After that, a floodlight tower stopped working due to which the game was stopped again. In the middle of the break, Indian spinner Yuzvendra Chahal, who has not played in any of the T20I matches yet, came up to South African spinner Tabraiz Shamsi on the ground and jokingly kicked him on the back, the video of which has become increasingly viral on social media.

Actually, both Chahal and Shamsi were not part of the playing XI for the match. South Africa’s Quinton de Kock, Aiden Markram and India’s Rishabh Pant were in conversation during the break. Tabraiz Shamsi was also present there.

After a while, Chahal also came there and jokingly kicked Shamsi on his behind. Let us tell you, both Chahal and Shamsi have played together for Royal Challengers Bangalore (RCB) in IPL previously. Shamsi was part of the RCB team in the season from 2016 to 2018.

Yuzvendra Chahal Sir 😅 his Character is so down to earth and Funny. @yuzi_chahal Sirpic.twitter.com/Zi7svSo1eb

Talking about the match, batting first, India scored 237 runs in 20 overs for the loss of 3 wickets. For the Indian team, KL Rahul scored 54 runs in 28 balls and Suryakumar Yadav played a brilliant fifty as he scored 61 runs in 22 balls. In reply, David Miller scored 106 runs not out in 47 balls for South Africa but he failed to win the match for his team. Apart from him, Quinton de Kock played an unbeaten half-century innings of 69 runs in 48 balls.