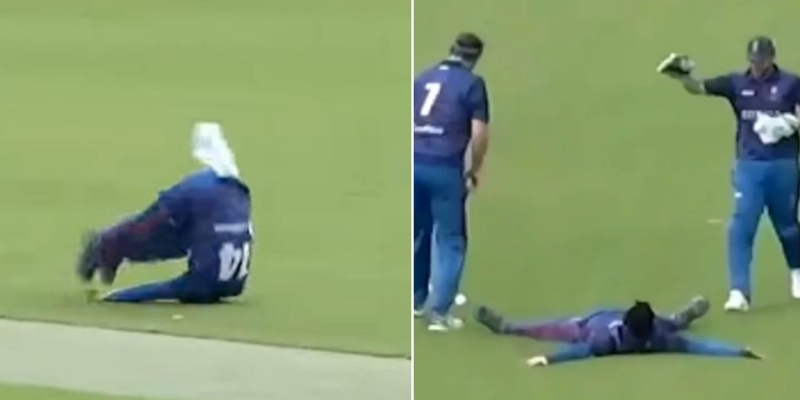 But, sometimes something happens on the cricket field, which is a bit difficult to believe at once. One of these unique incidents, the video of a strange wicket celebration has been shared by the ICC itself on its social media platform.

ICC has shared a funny video related to Serbian bowler Ayo-Mene Ejegi, after watching which you will hardly be able to control your laughter. In the video shared by ICC, after taking the wicket, the bowler is seen celebrating the wicket in an unusual way. One have rarely seen such a celebration before this in the history of cricket.

After taking a wicket, he takes a step forward in a calm posture and perform the feat, lie down like a dead corpse on the middle ground. By spreading both hands and both legs, the player lies on the ground in a fetish state for some time. The fans are also very fond of this style of the Serbian cricketer.

Talking about the player, Ayo-Mene Ejegi is a Serbian player who made his International debut in 2022 against Bulgaria at the age of 31-years-old. He has thus far played 11 T20I matches for Serbia and has 106 runs and 11 wickets to his name.

“Wait, which one?” – Watch: Babar Azam reacts surprised at question regarding surpassing Virat Kohli’s record
Watch: Liam Livingstone hits a one-handed Six to complete his fifty and take his team to victory
To Top