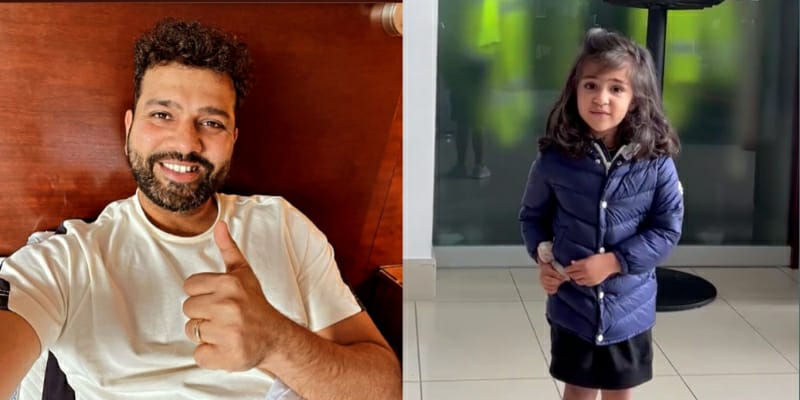 India and England will square off in the fifth Test, which will now begin on July 1 at Edgbaston in Birmingham. India suffered a major setback prior to the game as captain Rohit Sharma tested positive for COVID-19, raising questions on his ability to play in the 5th Test.

Rohit Sharma batted in the opening innings of the four-day warm up match against Leicestershire. He did not, however, play on the match’s last day because he was placed in isolation after testing positive for COVID-19. The squad was already without vice-captain KL Rahul, who was forced to withdraw from the game due to injury, so this was a major setback. In the five-match series, Rohit Sharma and KL Rahul both contributed significantly to India’s 2-1 lead.

Samaira , Rohit Sharma’s daughter, recently gave an update on her father’s condition. Samaira was asked what her father, Rohit, is doing by reporters in the UK in a video that has gone viral on social media. Samaira adorably responds to the questions by saying that Rohit is sleeping in the room, he has got corona and he is very positive. The cute video is gaining popularity online.

After Rohit Sharma tested positive for Covid-19, Mayank Agarwal was added to the team as a backup opener. Jasprit Bumrah, the first Indian bowler since Kapil Dev to captain the Test team, will likely take over as captain if Rohit Sharma is unable to recover in time.

India now leads the series 2-1, and a victory or a tie will give them their first Test series victory on English territory since 2007, when Rahul Dravid led India to a 1-0 series victory. The Three Lions of England will enter the game having destroyed New Zealand 3-0 in a three-match Test series. England will look to win this match to get some points in the World Test Championship points table.