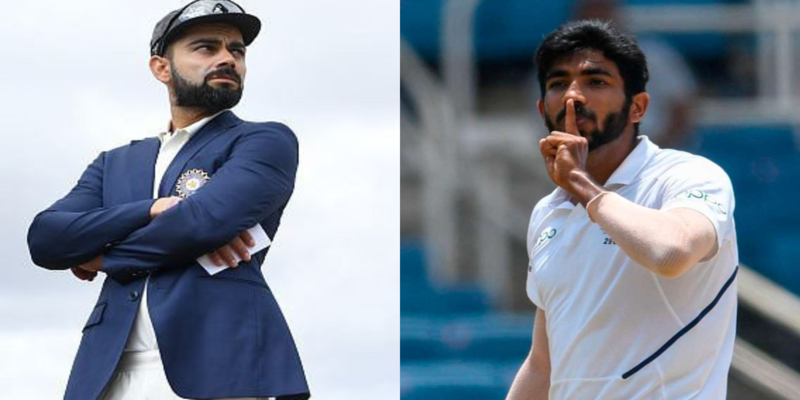 The Indian Test team is currently in England for the fifth and final rescheduled test match starting on June 1. The first warm-up match between India and Leicestershire is underway. But ahead of the rescheduled match, India has been hit with a major blow. The skipper, Rohit Sharma, has tested positive for COVID-19 and is under isolation. But Rohit will have to complete a six-day isolation, which means that he can not take part in the match.

That has left everyone baffled as KL Rahul is also not part of the team, so who will lead the Men in Blue in the absence of Rohit? The skipper batted on the first day of the warm-up match but wasn’t available for the second day. He didn’t even come out to bat in the second innings. Earlier, the BCCI confirmed that Rohit Sharma and Subhman Gill would open the innings in the fifth Test.

UPDATE – #TeamIndia Captain Mr Rohit Sharma has tested positive for COVID-19 following a Rapid Antigen Test (RAT) conducted on Saturday. He is currently in isolation at the team hotel and is under the care of the BCCI Medical Team.

However, Rohit’s availability will depend on his recovery and the RT-PCR test ahead of the match. Off-spinner Ravi Ashwin has also joined the team after recovering from COVID. Notably, all the matches in England are played without the bio-bubble restrictions. So it will be interesting to see what call the management takes for the captaincy.

There are three options available for India in the absence of Rohit Sharma:

Virat Kohli: The former Indian skipper is the perfect choice in the absence of Rohit Sharma. He was the captain in the first four matches and led India fantastically. His record is excellent in red-ball cricket. But the biggest question is whether he is really willing to lead the team again. It will totally depend on the BCCI if they can convince him.

Rishabh Pant: The 24-year-old recently made his captaincy debut against South Africa in the five-match T20I series at home. He did a decent job in the series. Pant is young but has experience of captaincy in the IPL. Notably, he has never led in red-ball cricket. That might be a concern for the management. But he is certainly the candidate for the captaincy.

Jasprit Bumrah: The ace pacer is another candidate to lead the team. But it will be a big thing because, after Kapil Dev (1987), he will become only the second pacer to lead India. He was also named the vice-captain of the team in the three-match ODI series against South Africa earlier this year. And as per some reports, he is the one who is likely to lead the team.

Top 4 players who have scored Double Hundred in both ODI and Test cricket
“At the moment, he is the big one” – Simon Doull names the world’s best player now
To Top